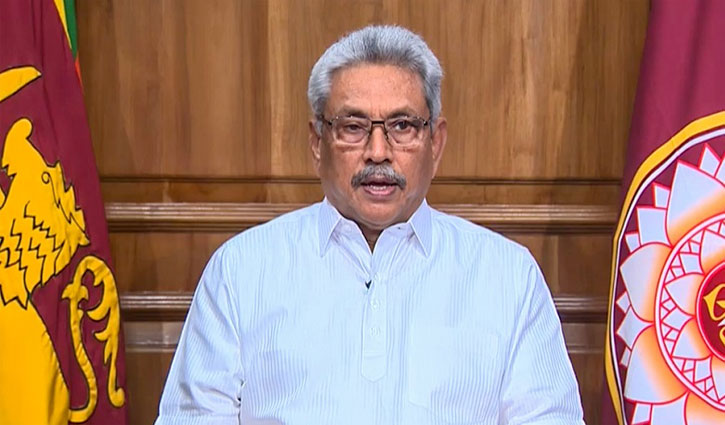 Sri Lankan President Gotabaya Rajapaksa has confirmed he will step down, the prime minister’s office said on Monday July 11, after tens of thousands broke into presidential palace to protest.

President Rajapaksa, who has been facing pressure to resign for months as the country struggles through its worst economic crisis on record, had signalled over the weekend his intention to resign on 13 July but has not addressed the public or submitted a resignation letter.

“Rajapaksa has officially informed Prime Minister Ranil Wickremesinghe that he will be resigning as previously announced,” read a statement from the prime minister’s office.

The development came after thousands of protesters stormed the presidential palace in Colombo on Saturday, and also set fire to the prime minister’s home.

Read Also: WATCH: Protestors in Sri Lanka cool off in the president’s pool after storming his residence

President Rajapaksa was evacuated from the presidential palace, and his current whereabouts are unknown.

Prime Minister Ranil Wickremesinghe has also agreed to resign after the formation of an all-party government.

Protesters have continued to occupy the president and prime minister’s official properties, claiming them as public property and stating that they will not leave until both have stepped down.

On Sunday, leaders from Sri Lanka’s main opposition parties met to try to form a new unity government and decide who would be put forward as the new prime minister and president.

Main opposition leader Sajith Premadasa and Dullas Alahapperuma, who was a minister under Rajapaksa, have been proposed for president and prime minister, respectively, The Associated Press news agency reported.

WATCH: How an airport baggage handler stole a plane for a joyride before crashing it

American rapper, Fish Scales is fortunate to be alive after he was shot, robbed and kidnapped outside an Atlanta brewery he co-owns. END_OF_DOCUMENT_TOKEN_TO_BE_REPLACED

19-year-old Florida rapper Smokingskul has just shared his new single and video “Nina”. Smokingskul is at the helm of a new era of plugg music known as “dark plugg”which substitutes the ethereal sounds of “plugg” with more tonal melodies that are accentuated by distorted percussion, producing a grimey, DIY sound. END_OF_DOCUMENT_TOKEN_TO_BE_REPLACED

Drake officially has more slaps than The Beatles. END_OF_DOCUMENT_TOKEN_TO_BE_REPLACED

Swizz Beatz and Timbaland have filed a lawsuit against Triller, claiming the company still owes them $28 million for the sale of their Verzuz series. END_OF_DOCUMENT_TOKEN_TO_BE_REPLACED