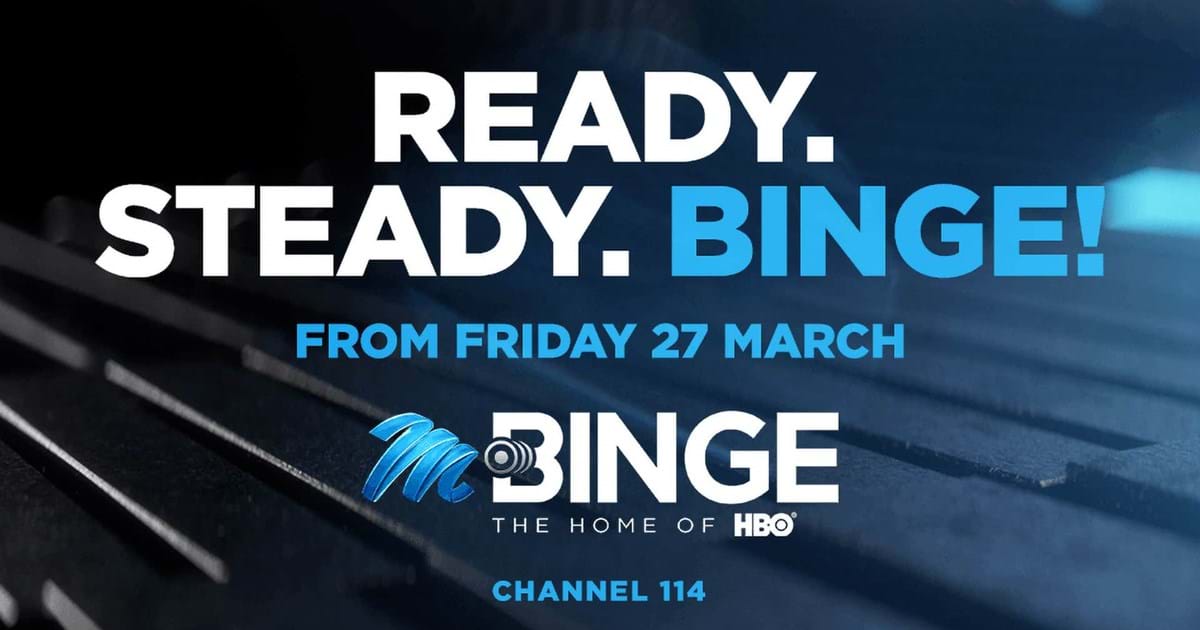 Although more and more Ghanaians  are home-bound  during this time, there’s no need for international series fanatics to fear long evenings of boredom. DStv has conjured up a must-watch pop-up channel with only the best of the best content from the HBO stable.  M-Net Binge – The Home of HBO, channel 114 on DStv Premium and Compact Plus, showcases full seasons of edgy, award-winning series as well as a selection of riveting documentaries and HBO Original films.

M-Net Binge – The Home of HBO kicks off on Friday 27 March at 19:00 CAT. Thereafter it will be available seven days a week, between 18:00  CAT to 06:00 CAT , Mondays to Sundays. Why 12 hours only? series aficionados may ask. Only because of the racy nature of the channel and age restricted material not suitable for daytime viewing

The weekday schedule for M-Net Binge – Home of HBO has been carefully curated to create appointment viewing. You will find the same series in the same time slot, on the hour, Mondays to Fridays.  From series like The Newsroom, which earned leading man Jeff Daniels several TV gongs, to executive producers Tom Hanks and Steven Spielberg’s epic war drama Band of Brothers and the Dwayne Johnson comedy series Ballers and the mega hit True Detective.  Not to forget the biggest HBO series of all time Game of Thrones, which will be screened from 23:00 CAT.

On Saturdays, up until 21:00 CAT, the line-up is packed with thought-provoking documentaries, followed by two episodes of Succession at 21:00 CAT. On Sundays from 20:00 there are also two episodes of another series that has been exclusive to streaming service Showmax until now: His Dark Materials.  That’s followed on Sundays by a superstack (6 episodes) of classic Sex & The City, starting at 22:00 CAT. As a special treat for night owls, the next item on air is the HBO film at 01:00 CAT. Viewers can catch documentaries on Saturdays between 19:00 CAT and 20:30 CAT and Sundays at 19:00 CAT. The unmissable documentary picked for Saturday 27 March is Ice on Fire. Narrated by Leonardo DiCaprio, it investigates solutions to try and reverse the effects of climate change while time is ticking.  The film this Sunday is Deadwood, the movie HBO created to conclude the hit series form the 1990s.

M-Net Binge – The Home of HBO will also be available on DStv Catch Up Plus on connected decoders. Fans can follow all the breaking news around the pop-up channel on the M-Net Website, and join the conversation with #mnetbinge on Twitter (@MNet), Instagram (@mnettv) and Facebook (@MNet).

For more information and find out about other  content, products and services, from DStv and visitwww.dstvafrica.com . To manage your account, download the MyDStv App. To enjoy all the extra entertainment on the move, download the DStv Now App which allows you to watch from wherever you are.

From the imagination of Aaron Sorkin, creator of The West Wing, comes another riveting political drama series, set in the newsroom of the fictional Atlantis Cable News television channel. It won a Critics’ Choice Television Award for Most Exciting New Series, along with Golden Globe nominations and a string of other accolades. These include a Primetime Emmy for Outstanding Lead Actor in a Drama Series (Jeff Daniels) and Outstanding Guest Actress in a Drama Series (Jane Fonda).

Hollywood legends Steven Spielberg and Tom Hanks, who collaborated on one of the greatest war movies of all time, Saving Private Ryan, team up again and revisits World War II as executive producers on a project that won high praise from viewers, and Emmy and Golden Globe awards for Best Miniseries. Based on a non-fiction bestselling book by historian Stephen E Ambrose, it follows the history of a parachute battalion from jump training in the United States through its participation in major actions in Europe.

The most talked about television series of the new millennium, bar none, took the fantasy genre to a new level. GOT won a record 58 Emmy Awards, and has a global fan base that long ago surpassed the one billion mark – and keeps growing. If you’ve just returned from another planet and missed it first time around, you’ve got some catching up to do. There are 72 episodes, all told. Set on the fictional continents of Westeros and Essos, it has several plot arcs and a huge ensemble cast. Please note that the series contains scenes of nudity and violence.

A funeral parlour may not sound like the ideal setting for a long-running drama series, but Six Feet Under was a smashing success, named by Time Magazine, The Guardian and Empire as one of the best television series of all time. Nine Emmy Awards, three Screen Actors Guild Awards, three Golden Globe Awards, and a Peabody Award back up those assessments. The story revolves around the trials and tribulations of the Fisher clan, owners of Fisher & Sons Funeral Home. Besides the usual themes of interpersonal relationships, love and loss, it fearlessly tackles the most important philosophical question of our time: the meaning of life

Strangeness and wonder mark this fantasy drama based on the cult novel series of the same name by Philip Pullman. The action takes place in a multi-world reality, switching from one to the other in an absorbing, unusual narrative. In an alternate world, all humans have animal companions called daemons. As it turns out, they are manifestations of the human soul. The main character is a girl named Lyra, an orphan who discovers a dangerous secret. And then her path crosses with a boy named Will. The series combines live action and animation and won an Annie, America’s top animation award.

An American satirical comedy-drama television series that won the British Academy Television Award for Best International Programme and the Golden Globe Award for Best Television Series – Drama. In addition to that, Brian Cox, one of the lead actors, won the Golden Globe for Best Actor – Television Series Drama. A dysfunctional family battles for control of a global media and hospitality conglomerate – and the patriarch’s health is in steep decline. Who will inherit the throne?

This Week’s episode features new music from Kay Faith, all the breaking hip hop news, and the hottest tracks of the week from around Africa! END_OF_DOCUMENT_TOKEN_TO_BE_REPLACED

Football fans on DStv already have the best seat in the stadium with SuperSport’s unrivalled football offering, and nowESPN (DStv ch. 218) is adding to the roster with  English Football League, Eredivisie and the Scottish Premiership returning, and the Belgian Jupiler Pro League joining the channel to  bring extra  football action from across Europe to audiences across the continent. END_OF_DOCUMENT_TOKEN_TO_BE_REPLACED

Hailed as “the best medical drama in years” by TIME, This Is Going To Hurt is now available to binge on Showmax END_OF_DOCUMENT_TOKEN_TO_BE_REPLACED

On Tuesday, August 2, Netflix hosted a “See What’s Next Africa” content showcase in Lagos, Nigeria, to spotlight its increased investment in Africa’s rich storytelling history through exciting new projects in a wide range of genres and formats that will be available in 190 countries. END_OF_DOCUMENT_TOKEN_TO_BE_REPLACED