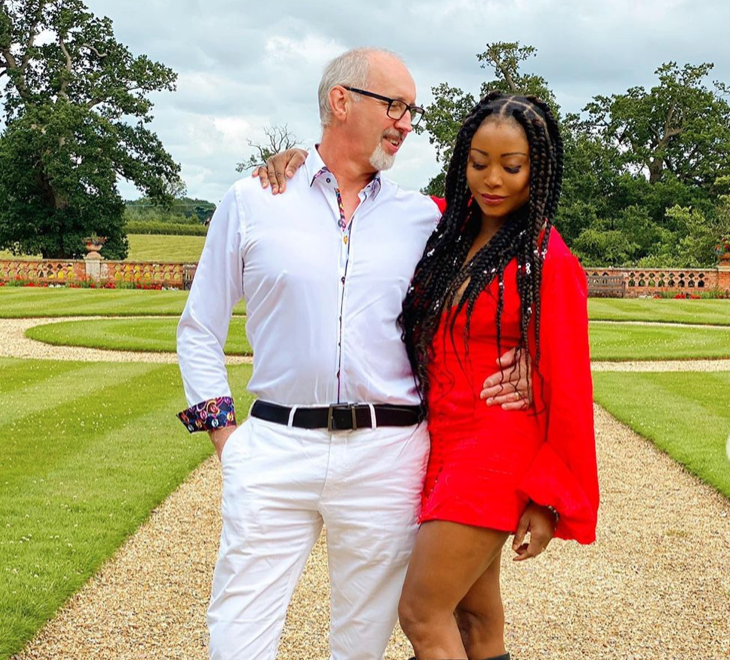 UK-based Ghanaian international singer and performer, Stephanie Benson has revealed that her family was against her marrying a man from a different race.

Mrs Benson, who recently celebrated her 33rd anniversary with her husband John Benson, revealed  in a long Instagram post on Monday, July, 17 that despite her family allowing the wedding ceremony to happen, her uncles spent hours rumbling about the possibility of their union failing.

“We got to Brighton about 11pm on the 17th June, 1989 after a huge struggle trying to get away from my Uncle. We had come home to say goodbye about 9pm leaving the wedding after party which was still going on in a hotel nearby. My Uncles’ living room was filled with the older members of the family who had left the party earlier,” she wrote.

Mrs Benson reveals that her Uncle’s disapproval of her marriage to John was an attempt for him to control her.

“For 2 excruciating hours, my Uncle rumbled on about how interracial marriages do not work. Looking back now, I think it was his last attempt to control me, and the man he soo desperately disapproved of. We were married now, this was my wedding night, what more did I have to do. My heart was racing, in fact, I had been sweating all day from the morning of my wedding to now,” she continued.

Stephanie, who shares five children with John, states that at that moment of uncertainty, she was proud to have chosen the right man because John was not intimidated by her Uncle’s threats.

“I looked up to see Jon staring at me. I saw the look in his eyes, The look that spoke beyond words… “I got you, you are mine now, Just leave it to me.” Jon stood up, all 6ft 3 inches, lean body that I couldn’t wait to explore, touch, kiss. Some of which might need a few Hail Marys and confession later, but right now, he was the man I feel in love with, confident, exciting, The first man, I know, who was not intimidated by my Uncles’ wealth or bold threatening statements,” she revealed.

“I will never forget the words that escaped Jon’s lips soo easily. The words that came out of the only white man in the midst of 12 elderly educated but traditional African Men and their soft spoken wives, who looked like it’s been decades since they suckled a man’s balls in their mouth. “I’ll have to disagree, Jon said casually, “we will be taking our leave now, because I simply can’t wait to make love to my wife,” she added.

She continued; “I felt my heart disappear out of my body. I prayed for the spirit of my Grandmother to help me disappear, temporarily. Although I was embarrassed, I was strangely elated and completely turned on….

Who I am now is a product of where I’ve been. What I’ve learnt, and how hard I’ve fought. In 2022 picture, you see a face that believes, nothing is impossible, no one is indestructible, most of all True Love, Real Love is unstoppable.”

The woman who led the “Me nsa aka ooo” TV commercial 13 years ago to promote MTN’s Mobile Money (MoMo) has been gifted a 2-bedroom house. END_OF_DOCUMENT_TOKEN_TO_BE_REPLACED

It’s difficult to predict where Stonebwoy will be in the coming days, weeks, months, or years. As a musician with a keen interest in pushing his sound to the world and etching his name in the minds of new fans, 2022 has been described as his busiest music year thus far since gaining mainstream recognition in 2012 with Pull Up—seven years after he made his official debut—the musician confirmed this via social media after his last summer show. END_OF_DOCUMENT_TOKEN_TO_BE_REPLACED

Ghanaian actress, Nana Ama McBrown has revealed that there’s absolutely no bad blood between her and her ex boyfriend, rapper, Okyeame Kwame. END_OF_DOCUMENT_TOKEN_TO_BE_REPLACED

Veteran Ghanaian actor, Kofi Adjorlolo has denied claims that he was set to marry the mother of popular Dancehall act, Shatta Wale. END_OF_DOCUMENT_TOKEN_TO_BE_REPLACED