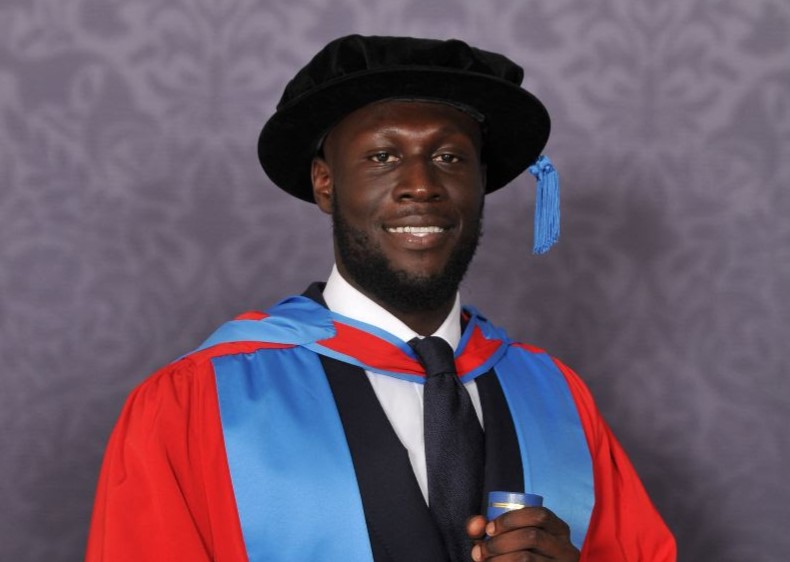 The British rapper used his speech to express immense gratitude for the achievement, and also took time to give a nod to fellow graduates.

“The journey I took to get to this moment has been considerably different to yours. You guys have the guts and the grit and the dedication that it takes to study for years and to finish your degree whereas I got my AS results in my first year of college and said, ‘Yeah, see you later,’” said the 28-year-old emcee. “I didn’t have the same minerals that you guys have.”

He also addressed his mother in the heartfelt speech, noting that he was grateful to have her “sitting there beaming with pride and joy.” Stormzy shared that it was her biggest dream for him to attend college.

Stormzy has received an honorary degree from the University of Exeter in recognition of his outstanding achievements in higher education philanthropy. This includes the "Stormzy Scholarship", which provides Scholarships for Black British students at the University of Cambridge 👏🏾 pic.twitter.com/fJtAtjVXiv

“Her biggest dream for me was for me to go to university and graduate and then become somebody so this moment is real full circle,” he continued. “And I always say that God has a funny way of bringing you exactly where you were meant to end up.”

Stormzy, whose given name is Michael Ebenazer Kwadjo Omari Owuo Jr., was also recognized by University of Exeter Vice Chancellor, Professor Lisa Roberts. “We are proud to honour Michael for his remarkable contribution to society and extraordinary talent,” she shared.

Additionally, she called him “an outstanding musician and wordsmith” who “inspires people to speak openly about their beliefs and fight for their rights.” Social justice is a key focus of the university’s new ten-year strategy and aims “to open doors to people from all walks of life into higher education.”

“It took a hell of a lot for you to get here today,” Stormzy expressed in his speech. “Your journeys to get to this moment were hard fought. The road you took was not easy. And this is coming from someone who tried to walk that exact road and failed.”

Amber Heard has ‘world’s most beautiful face’ according to science

Amber Heard’s legal teams filed an official motion in court on Friday that the verdict in her blockbuster case against Johnny Depp is thrown out. END_OF_DOCUMENT_TOKEN_TO_BE_REPLACED

US clergyman, Creflo Dollar, has denounced his position on tithing. For many years, Creflo had preached on the importance of Tithing and had informed his congregation that failing to tithe opens the door for devourers to come in and destroy a person’s life. END_OF_DOCUMENT_TOKEN_TO_BE_REPLACED

David Beckham and Victoria Beckham have taken to Instagram to profess their love for each other on their 23rd wedding anniversary. END_OF_DOCUMENT_TOKEN_TO_BE_REPLACED

Chris Brown has said the public is only interested in negative news about him but go silent when he drops an album. END_OF_DOCUMENT_TOKEN_TO_BE_REPLACED

Congratulations are in order for singer Jhené Aiko and rapper Big Sean as they are reportedly expecting their first child together. END_OF_DOCUMENT_TOKEN_TO_BE_REPLACED

Videos have emerged of the moment a Russian ice hockey star who signed a million-dollar contract with an American team was rounded up by Russian policemen and taken to an army enlistment office before he is sent to fight in the war in Ukraine. END_OF_DOCUMENT_TOKEN_TO_BE_REPLACED