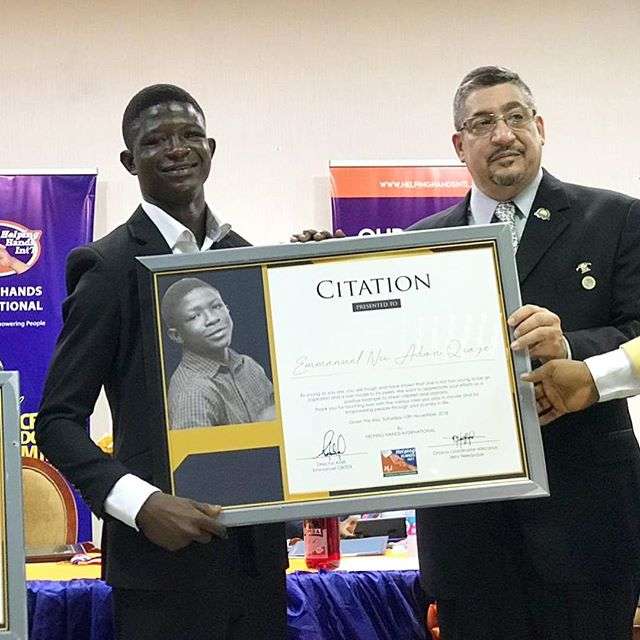 Strika-receives-citation-for-his-role-in-Beasts-Of-No-Nation-[/caption] Child actor Emmanuel Nii Adom Quaye popularly known as Strika has received another  recognition for his role in the Hollywood movie ‘Beasts of No Nation”. He was presented with a citation from Helping Hand International (HHI). Strika, starred in the award-winning film alongside Abraham Attah and Idris Elba. He played the role of a troubled and broken boy who, through war, was turned into a mindless killer. His role in the movie and subsequent ones has earned him enormous honours and citations, and the latest comes from Helping Hand International (HHI). He shared the good news via Instagram on Monday, November 12, with an emotional caption which reads: “It matters not how strong a person is or how alone a person can stand, sometimes in life, you need someone to look at you in the eye and say “YOU DID GOOD”. This citation from Helping Hand International (HHI) has really given me some inner strength and encouragement to do more as an actor and a Ghanaian. This is the FIRST time I am receiving such honour after #BONN came out. It tells me that I haven’t been forgotten, it tells me that people will not just ask for photographs with me and walk away and pretend they don’t know me the next time we meet. As a young boy growing up, I wish I would be appreciated more by society and given more love to strengthen me to keep pushing hard. https://www.instagram.com/p/BqEz0e1gsYH/]]>

"Don't give anybody the authority to take your life!" – Singer, Rashelle Blue advises

Highly Spiritual Music signee, Lasmid, has stated that he wasn’t expecting his song “Friday night” to reach such great heights within a short time frame. END_OF_DOCUMENT_TOKEN_TO_BE_REPLACED

The 2023 African Cup of Nations, AFCON initially scheduled for Côte d’Ivoire next June will now be held in January and February 2024 due to the concerns over the rainy season in the country. END_OF_DOCUMENT_TOKEN_TO_BE_REPLACED

Bose Ogulu has told her son Burna Boy to “tone down the madness” as she celebrated his birthday. END_OF_DOCUMENT_TOKEN_TO_BE_REPLACED