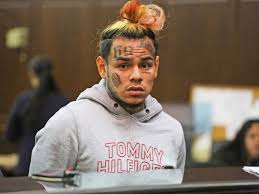 American rapper, Tekashi 6ix9ine will not be serving the rest of his prison sentence behind bars after he was released to home to avoid contracting coronavirus because he is classed as a ‘vulnerable’ inmate.

The rapper was released early Thursday afternoon into house arrest over fears that his chronic asthma puts him in the high-risk category of contracting Coronavirus.

“He’s out and he’s very happy to be released,” his defense attorney, Lance Lazzaro, told NBC News after Judge Paul A. Engelmayer granted his motion for compassionate release.

Citing safety concerns, Lazzaro declined to reveal where Tekashi would stay for the final four months of his two-year sentence.

The 23-year-old rapper, whose real name is Daniel Hernandez, had been serving a 24-month sentence after pleading guilty to nine charges including conspiracy to murder and armed robbery at an upstate New York prison. He has already served 13 months of his two-year sentence, and was due to be released in August 2020.

The decision to release him to home confinement comes as New York City is battling the spread of the coronavirus, including in prisons and jails with at least 180 cases of coronavirus already confirmed at several jails in the City.

According to NME, 6ix9ine will serve his first four months of home incarceration with supervision, which will be enforced by GPS monitoring. Due to the coronavirus pandemic, he will have to stay at his residence unless he asks permission from the probation department to seek medical treatment or talk with his lawyer.

Battle of the producers: Jay Q vs Appietus, who is the winner?

Actress Taraji P. Henson halts her wedding to Kelvin Hayden after losing her uncle to COVID-19

Opinion: It is dangerous to block citizen’s access in COVID-19 pandemic