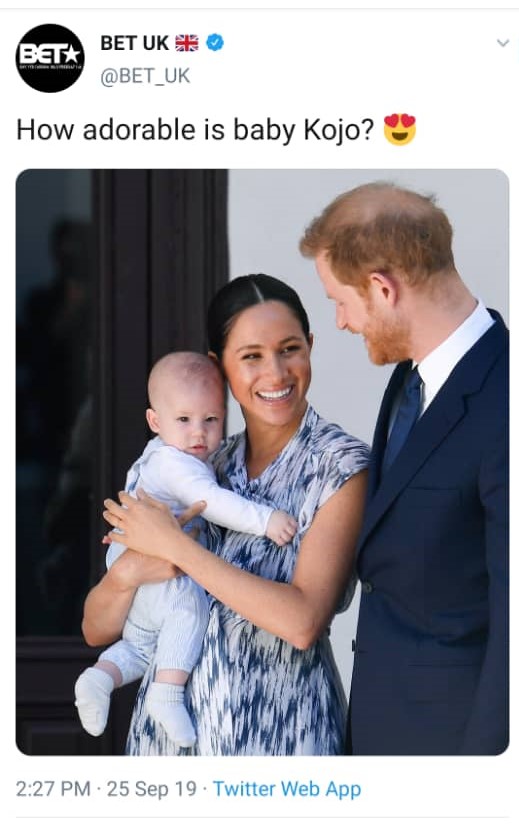 Baby Archie stole the show on the third day of Meghan Markle and Prince Harry’s royal Africa tour and won more African hearts when BET UK’s twitter account called him ‘Baby Kojo’. But is that really a part of his royal name?

Master Archie Harrison Mountbatten-Windsor is the son of Prince Harry, Duke of Sussex, and Meghan, Duchess of Sussex. A great-grandchild of Queen Elizabeth II, he is seventh in the line of succession to the British throne.

Being born on Monday, 6 May 2019 and currently on his first African tour,  it’s no surprise that BET UK will refer to Baby Archie as Kojo since Kojo represents males born on Monday in Akan.

Because the Duke of Sussex is not the eldest son of the Prince of Wales, his son is neither a British prince nor does he have the style “Royal Highness”. His parents had the option of using one of Prince Harry’s subsidiary titles, such as Earl of Dumbarton, as a courtesy, but they decided instead that he would be styled as Master Archie Mountbatten-Windsor, in accordance with their wish that he grow up as a private citizen.

Diddy’s Ex, Cassie marries the trainer he hired for her