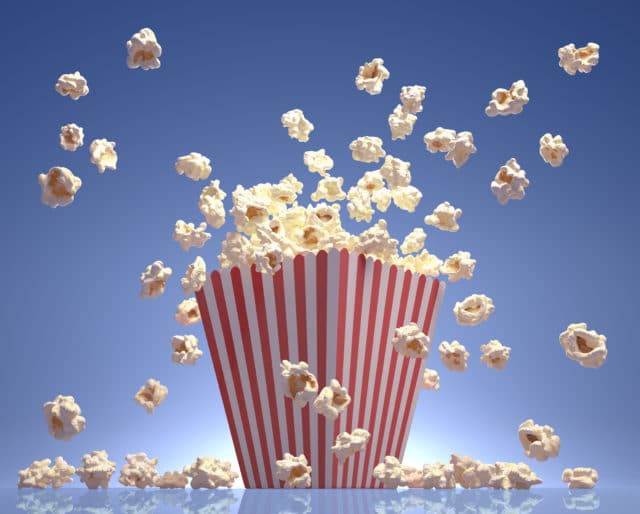 Finally, a day dedicated to watching all the best movies! Celebrate Popcorn Day on Sunday the 19th of January with a big ol’ bowl of popcorn and our pick of the eight best family movies.

Get comfortable in front of the telly, because these movies are not to be missed:

B.A.P.S or, Black American Princesses, tells a story about two waitresses (played by Halle Berry and Natalie Desselle) working in a soul food diner with dreams of opening the world’s first combination hair salon and soul food restaurant. Through an unusual turn of events, the pair end up caring for an ageing millionaire who welcomes them into his mansion, and they soon find themselves plotting to milk the millionaire of his fortune.

Becky, an intelligent and sociable high school senior, finally gets the attention of a charming and handsome new student, Rob, when she becomes a member of the cheerleading squad. Everything seems to be going perfectly for Becky until Rob’s affection turns into obsession.

A bristling look at social media fame, Jawline follows the rise and fall of 16-year-old Austyn Tester, an internet influencer who built his following on wide-eyed optimism, as he tries to escape the humdrum of life in rural Tennessee.

Set in 1954, a few years before the Partition of India and Pakistan, Kalank (Hindi for “blemish”) is a story about love going beyond the norms and rules of society, the trappings of religion and other physical, man-made boundaries.

The highly anticipated sequel to Avengers: Infinity War, Endgame takes place twenty-three days after Thanos – the villain fans love to hate – disintegrated half of all life in the universe. Now, the Avengers must assemble one last time to defeat Thanos and bring back the friends and family they had lost.

In Reprisal, a bank manager is haunted by the death of a co-worker whose life was taken during a violent heist. The bank manager then joins forces with a former police officer to take down a highly-trained criminal, and soon all three men find themselves at breaking point.

Set six weeks after Jason Bourne’s escape from Moscow in The Bourne Supremacy, Aaron Cross, an agent of the Department of Defense, is assigned to Alaska for a training exercise. After going off the grid for four days, Aaron is forced to survive extreme weather and harsh terrains as punishment.

When a Korean mob boss orders a hit on undercover FBI agent, John Maxwell, his partner Malcolm Turner, goes beyond the call of duty to rescue him.

Laugh out loud for this classic comedy on Studio Universal (DStv channel 112) on Sunday 19 January at 18:15 CAT.

With quality movies galore, there’s no better way to celebrate Popcorn Day than with DStv.

Also, DStv is giving an early gift to all active and disconnected DStv customers. These customers can pay for their current package and get bumped up to view programming on a much higher package for the next 30 days!

Download the DStv Now App to enjoy quality entertainment anytime, anywhere. You can also download the My DStv App to manage your account and control your viewing, effortlessly.

Related Topics:Popcorn Day
Up Next