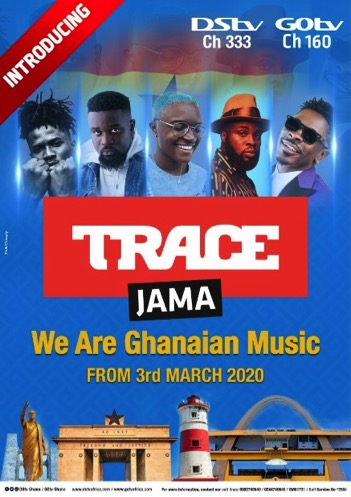 The Month of March brings the launch of two new exciting local channels, celebration of strong women and exciting new content on DStv. Here are our picks.

TRACE, the No.1 Afro-Urban entertainment company with a mission to empower the youth has officially launched a channel dedicated to Ghanaian music and culture, named TRACE JAMA. From the 3rd of March 2020.

TRACE JAMA aims to entertain music lovers from the Gold Coast of Africa with stunning visuals, the coolest music videos from the hottest artists and content built to inspire and empower the community. The channel will focus on Ghanaian music and include the world’s biggest Hip-Hop and R&B artists through chart countdowns, interviews and documentaries related to urban artists and culture. TRACE JAMA will also feature as an ideal destination where brands can meet youth.

The channel is accessible to all DStv Family, Compact, Compact Plus and Premium subscribers on Channel 333 and the Channel will offer diverse programming that will include:

Multichoice Ghana announced the expansion of its Audio portfolio a with the launch of Adom FM on DStv and GOtv.

Adom FM is a leading local FM station from the Multimedia Broadcasting Group and features exciting programmes including, the multi award-winning morning show Dwaso Nsem which keeps listeners updated with a dynamic mix of lifestyle, current affairs and factual content will ensure audiences get their daily fix of real-life radio all in one channel.

On the DStv platform, Adom FM will be available on the Premium, Compact Plus, Compact, Family and Access packages allowing for more relevant radio content to reach a wider spectrum of listener in Ghana.

Adom FM has been serving an array of shows to passionate listeners with content that inspires, informs and entertains in Akan for over 10 years.

Through honesty, integrity, sweat, selflessness and the love for their city, these gallant men and women bring hope to the city they love, Chicago. Watch all three Chicago series, Chicago Fire, Chicago Med and Chicago PD starting from 6pm Tuesdays on M-Net CH 101.

Thirteen of the most talented fashion designers compete on extraordinary levels to impress the judges and win the grand prize. Project Runway All-Stars, Season 7 shows Wednesdays at 6pm on 1Magic CH 103.

The collected communities are reluctantly respecting the new borderlines imposed on them. The very idea of whether civilization can survive in a world filled with the dead hangs in the balance.

A new season of The Walking Dead shows Mondays at 6:45pm on FOX CH 125. You don’t want to miss this.

The show follows hosts as try to catch some of the most poisonous snakes found in various destinations across the world and encounter life-threatening situations. Snake City, Season 6 shows Sundays at 4pm on National Geographic Wild CH 182.

The heat is on. Catch Amazing Voices on Africa Magic Family Channel 154 at 1pm every Sunday to hear great songs from across the continent and see which group is the first will be sent home. Don’t miss this show as it is co-hosted by Elkem Kumordzi and has Trigmatic as one of the judges.

The drama on the Ultimate Love reality TV show went up a notch as three new love guests entered the Love Pad Friday night. The new love guests; two gentlemen – Chiddy Bank and Chris Ville, and a lady – Meriton, were given the opportunity to pair with any interested and unsatisfied love guest and vie for the chance to win a lavish traditional wedding, a house and lots more if they emerge winners of the show and commit to getting married.

The show has so far shown to be very unpredictable as the couples and viewers look forward to the Sunday live show to know what other surprises Aunty will be bringing to her Love Pad.

Ultimate Love is available 24/7 on DStv Premium, Compact Plus, Compact, packages ON CH 198.

Four curious young dinosaurs named Rocky, Bill, Tiny, and Mazu go on adventures while following their herd. Rocky is the courageous one, Bill is the most timid, Tiny is the smallest yet most playful, and Mazu is the most inquisitive. The four friends look at things such as mapping the stars and searching for flowers but most importantly, they are asserting their independence and learning to do things away from the safety of the herd. New episodes of Giganotosaurus shows 2-27 March on Disney JR CH 309 at 4pm.

SuperSport viewers on DStv will soon be treated to the biggest club football match in the world as the latest edition of El Clasico – the rivalry between Barcelona and Real Madrid – draws ever closer.

The teams’ La Liga Round 26 clash is set for Estadio Santiago Bernabeu on Sunday 1 March 2020 at 8pm and you can see all the action live on your DStv.

Reconnect now to enjoy the best viewing experience only on your DStv.

Related Topics:Trace Jama
Up Next

Voting For AMVCA Ends In 11 Days – Have You Voted For Your Favourites Yet?

The History of El Clasico