Ivan ‘Don’ Ssemwanga, a flashy Uganda tycoon and former husband of  Zari  Hassan (current wife of  popular Tanzanian musician Diamond Platnumz), is making headlines even in his death. His cronies poured out money into his coffin and he was buried with it, leaving Uganda and the world talking.  A concerned citizen, Abey Mgugu, has dragged  A-Plus funeral management and Bank of Uganda to the High Court seeking orders that the body of late Ivan Ssemwanga be exhumed and all the currency notes that were buried with him removed. Mgugu argues that the purposes of the said monies put into the grave were misused. “Burying a dead body with money is a wastage of public property which violates social and economic rights of other people,” he argued. Mgungu wants an order that the said money be put back into circulation  for purposes of respecting the currency of Uganda and other countries like South Africa and the United States of America. Mgugu wants a declaration that Bank of Uganda willfully and negligently failed to ensure the respect of the said currencies and is also seeking a declaration that he be allowed to recover the money from the grave on behalf of Ugandans. 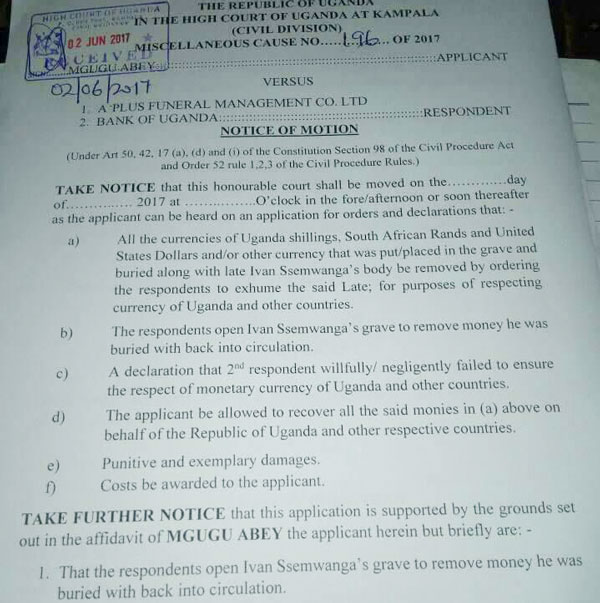 On Tuesday this week at Nakaliro village in Kayunga,  socialites of the so called Rich Gang team, were seen throwing money into their colleague Ivan  Ssemwanga’s grave, an act for which Mgugu  seeks general damages.

Ivan Ssemwanga,39, died on Wednesday May 25, 2017 at Steve Biko Hospital in Pretoria, South Africa where he was based. Semwanga was one of the members of the self styled Rich Gang group well known in both South Africa and Uganda. Ssemwanga had three boys with Zari. She is now in a relationship with Tanzanian celebrated musician Diamond Platnumz.]]>

Related Topics:Ivan ‘Don’ Ssemwanga
Up Next

#CelebFunFacts: Did you know a fan once put her hand into Edem's pants at a concert?