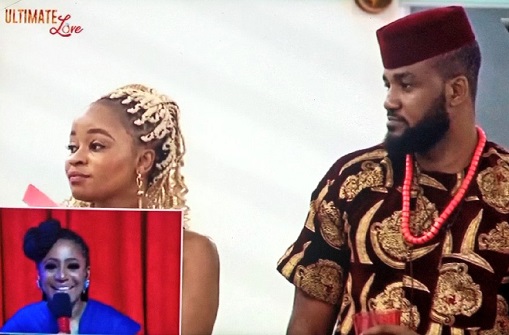 After just one week of featuring in the Ultimate Love reality television show, a love guest, Uche has opted to check out voluntarily, but Aunty of the show has politely barred him from leaving.

Everything was fine until the Love Guests were officially paired according to the partner they chose. But out of ten pairs, seven pairs were decided voluntarily, while three were decided by chance.

Unfortunately for Uche, he wasn’t paired with his closest love guest, Theresa. He was left with Chris.

As soon as they were paired, Uche and Chris quarreled during their first task of nominating two pairs for possible checkout. As Chris was reading the names, Uche could be seen echoing that the nominations were not unanimous.

Nevertheless, the nominations were accepted by the hosts. But as both Uche and Chris sat down it was obvious that their union will not last.

When Aunty came into the Love Pad to address the Love Guests, Uche drew her attention, saying that he wants to voluntarily check out. He said, “I want to withdraw, it is not worth it.”

The Love Pad Aunty who looked disappointed told him that he can’t withdraw at this point, noting that it will be next week during the live show. But a poised Uche told her that he wants to leave, maintaining that he knows the rule book.

At that point, Aunty begrudgingly told him that she needs to go back and look at the rule book.

Continue Reading
Advertisement
You may also like...
Related Topics:Ultimate Love