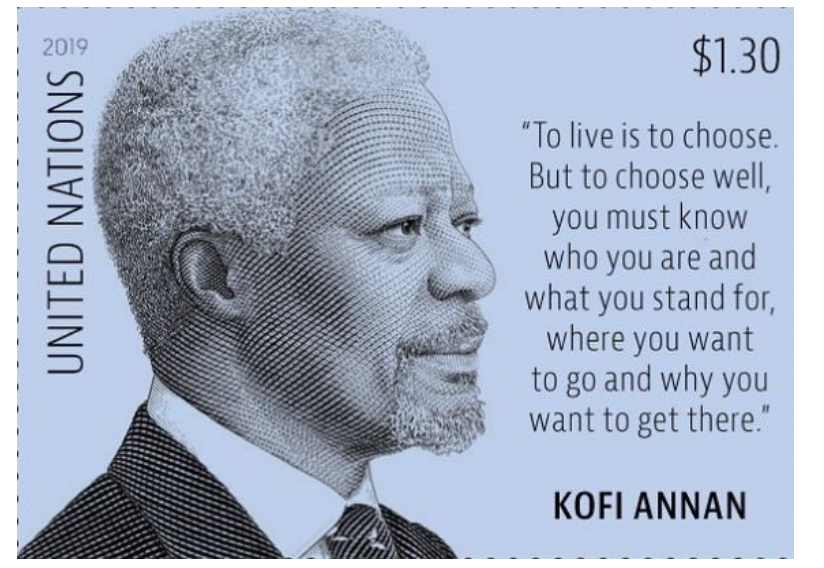 To honour the former United Nations Secretary-General Kofi Annan, the United Nations Postal Administration of the Department of Operational Support issued a definitive stamp of US$1.30 on May 31.  The stamp features a portrait of the late Kofi Annan which was illustrated by the famous artist and engraver Martin Mörck.
The quote on the stamp reads “To live is to choose.  But to choose well, you must know who you are and what you stand for, where you want to go and why you want to get there.”

The stamp sheet and first day cover were designed by Rorie Katz of UNPA. Kofi A. Annan of Ghana, the seventh Secretary-General of the United Nations, served from 1997 to 2006. He was the first to emerge from the ranks of United Nations staff.

As Secretary-General, Annan gave priority to revitalizing the UN through a comprehensive programme of reform; strengthening the Organization’s traditional work in the areas of development and the maintenance of international peace and security; advocating human rights, the rule of law and the universal values of equality, tolerance and human dignity; restoring public confidence in the Organization by reaching out to new partners and, in his words, by “bringing the United Nations closer to the people”.

US to demand social media details from visa applicants

In 2001, Annan and the United Nations were jointly awarded the Nobel Prize for Peace. He also received numerous honorary degrees and many other national and international prizes, medals and honours.

Upon leaving the United Nations, Mr. Annan established the Kofi Annan Foundation in 2007, an independent, not-for-profit organization that works to promote better global governance and strengthen the capacities of people and countries to achieve a fairer, more peaceful world.

As earlier reported, on Wednesday (June 29), R. Kelly received 30 years in federal prison for sex trafficking and racketeering. Today (July 1), new details have been shared regarding the terms of his sentencing. According to reports, the “Ignition” singer must undergo sexual treatment if he is ever released. END_OF_DOCUMENT_TOKEN_TO_BE_REPLACED

US based British comedian/TV host, James Corden went to the White House as part of a segment for his tv show ‘The Late Late Show’ and posed as president Joe Biden’s personal assistant . END_OF_DOCUMENT_TOKEN_TO_BE_REPLACED

Taylor Swift is engaged to her British boyfriend Joe Alwyn, according to reports. END_OF_DOCUMENT_TOKEN_TO_BE_REPLACED

INTERPOL, in collaboration with the US Secret Service, South African Police and other agencies, has arrested an alleged Nigerian cybercrime kingpin, James Aliyu, in connection with $12m romance scam and business email compromise fraud. END_OF_DOCUMENT_TOKEN_TO_BE_REPLACED