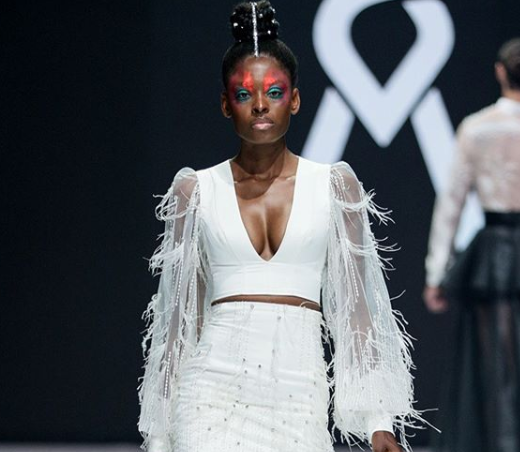 It is becoming obvious that no one can match top model, Victoria Michaels, when it comes to runway mileage this season.
She keeps doing amazingly well on major and international fashion platforms.

One of such shows is the just ended spring and summer season of African Fashion International (AFI) Fashion Week in South Africa. She was among top fashion models that brought life to the AFI Fashion Week.

She had the honor of showcasing designs by top designers including David Tlale, whose works for the night have been described as “meaningful”.

His presentation began with fun and colourful pieces, drawing inspiration from his ‘Heritage Month’ collaboration with Tastic Rice, as well as the rich and vibrant cultures found in South Africa.

Visuals and images of Victoria on the runway during David Tlale’s showcase have been generating a lot of attention on social media.

On Instagram she said, “It was an emotional night for models, guests and designers as @davidtlale paid tribute to his mother with a tribute worthy collection @afi_sa Fashion Week.”

“Thanks to the amazing @andiswamanxiwa @deonredman and the entire crew for having me. I love you @taryncannings.”

Victoria also walked for Taibo Bacar, Matte Nolim, La Art Neoville, House of Jahdara and Kreyann, all of whom are amazing designers.

The model, who was born in Accra, to Nigerian father and Nigerian-Ghanaian mother, is one of the most celebrated models on the continent. Aside the runway influence, she was recently announced as a champion of the environment as she joins European Union (EU) climate change campaign, in addition to other amazing social projects

Viola Davis makes a stunning transformation in the new trailer for ‘The Woman King’, in which she plays Nanisca, leader of the all-female warriors known as the Agojie. END_OF_DOCUMENT_TOKEN_TO_BE_REPLACED

African-American businessman and jet broker Kelvin Mensah, popularly known as PJKev has added his voice to the many people against the building of the National Cathedral. END_OF_DOCUMENT_TOKEN_TO_BE_REPLACED

Nigerian hip-hop artiste, Eedris Abdulkareem has disclosed that he is battling kidney failure and will have a surgical operation at the end of July. END_OF_DOCUMENT_TOKEN_TO_BE_REPLACED

According to reports from Nigeria, unidentified gunmen have attacked an ‘advance team’ of President Buhari’s presidential aides leading to injuries to two people. END_OF_DOCUMENT_TOKEN_TO_BE_REPLACED

Sensational highlife/afrobeat artist KiDi has said that his dream is to collaborate with Daddy Lumba on a song. END_OF_DOCUMENT_TOKEN_TO_BE_REPLACED