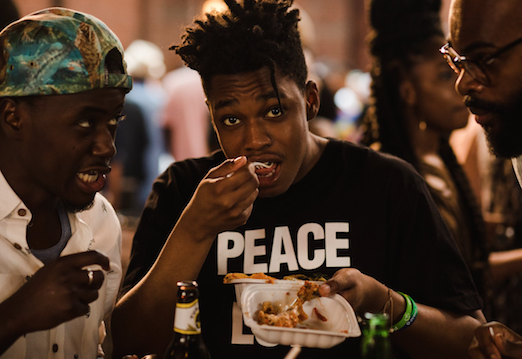 “No! No! No! No way will Ghana let Nigeria have the luxury of winning #JollofWars come the 2018 edition of Jollof Festival in Washington DC again, this 2nd time must be in Ghana’s favor, Ghana cannot lose to Nigeria like in 2017!” Exclaimed Kwame, my Ghanaian friend who is based in the Washington DC area of the United States (US). After blurting out those words, Kwame wipes his forehead with his hands and finally breathes evenly. He then turns his gaze towards me and asks, “by the way when is the 2018 Jollof Festival happening though?” Before I could even answer, Ifeanyi calmly and cheekily responded: “Kwame it’s going to be on July 7, 2018, from 2-8PM, and yes Nigeria will win this one too.” So Ifeanyi; who is a Nigerian-American, and Kwame, became friends of mine after I encountered their enthusiasm for jollof rice during my coverage of the first ever Washington DC Jollof Festival organized by Ishmael Osekre of Afropolitan Insights and presented by Leslie Tita of I/O Spaces. TheAfricanDream.net was a media sponsor for that event. Anyway, I called up Kwame and Ifeanyi to sit with me in the first week of May 2018, just to chit-chat about the upcoming Jollof Festival in July as a way of warming up for it, plus these two young men presented me with the greatest picture one could ever paint about the Ghana-Nigeria rivalry that ignited the #JollofWars years ago online. While we chatted Ifeanyi drew my attention to the fact that one Tracey Duodu was the first person ever to use the #JollofWars hashtag on Twitter in April, 2011, I of course had to check that out for myself and voila, she was indeed at least based on this link: https://twitter.com/MissTraceyD/status/54536762890010624 so I decided I had to send her a shout for her role in #JollofWars history, lol. “Let me see it for myself” Kwame shouted, so I handed him my phone, he looked into it and then with a smirk on his face he looks at Ifeanyi and said with a wry smile, “my friends, do you actually know that this lady is Ghanaian?” With that, a fresh debate ensues between the two over the possibility of Tracey not being Ghana. But gradually the focus shifted back to which country had a superior-tasting jollof rice. And me? Well I merely sat and watched like the curious observer that I have always been. It was interesting.

Then my phone rang, I grabbed it from Kwame, spoke into it for about half a minute, hanged up and told my friends I had to leave. I however informed them that besides Ghana and Nigeria, Cameroon and Senegal will feature in the 2018 #JollofWars. The venue will be the Union Market in Washington DC.

As I prepare to leave they ask in an almost synchronized voice: “by the way who are you rooting for?” I dreaded that question but still mustered enough courage to quickly respond that I personally am hoping the real inventor of Jollof actually wins – Senegal, or Gambia, or the Sene-Gambia. At this point they looked at me in a confused state, so I found my chance to say bye and quickly left before it was too late. Oh well, there you have it, I didn’t start a new war because am not even Senegalese. I still love you Ifeanyi and Kwame. By the way If you’ve read this far and want to know what jollof rice is then please ask Wikipedia or Google… Anyway, for updates on Jollof Festival follow @JollofFestival or @JollofFest on Twitter, or like the Jollof Festival page on Facebook. Also, check out jolloffestival.com and jollofwars.co to find out more about past and upcoming events near you or around the globe. Oh and will some please tell António Guterres at the United Nations that #JollofWars is back in Washington DC, and this time it’s under the Donald Trump Presidency! Written by Oral Ofori]]>
Related Topics:Jollof Festival
Up Next