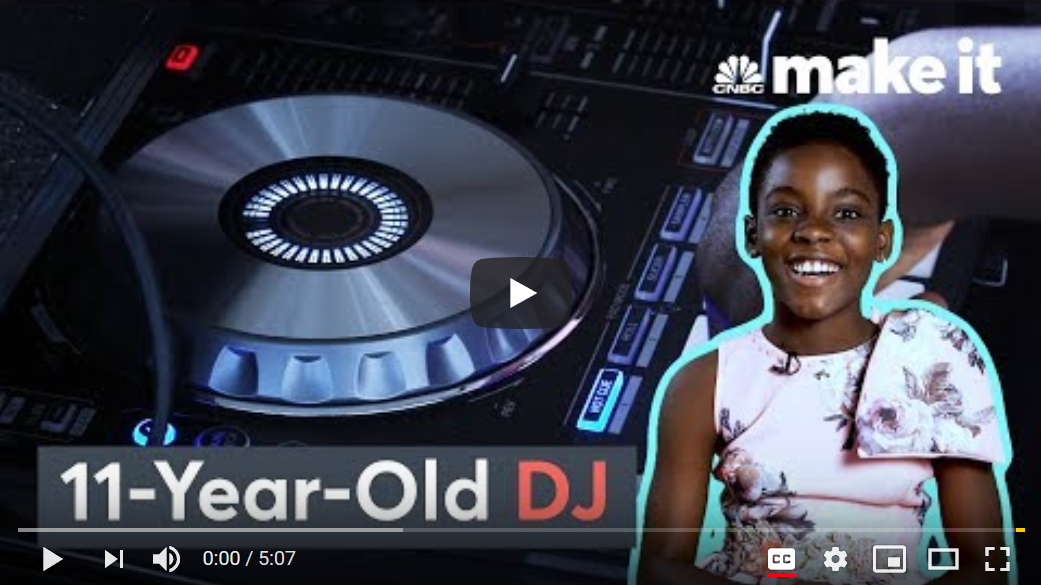 Not long ago, the talented DJ appeared at the World Bank African Society Symposium in Washington DC where she treated audience to a great performance.

DJ Switch mesmerized her audience with captivating performances alongside her views on some topics which were tabled for discussion at seminars a including billionaire Bill Gates at his New York for GoalKeepers 2018, Grammy Award winner Wyclef Jean at the “Room To Read” New York Gala and wife of Canada’s Prime Minister Sophie Grégoire Trudeau, at the Women Deliver Summit in Vancouver, Canada.

Below is an article about DJ Switch put published by American news website CNBN. The article was published on June 15, 2019

Erica Armah Bra-Bulu Tandoh is a DJ who performs around the world and has shared the stage with famous musicians and performed for billionaires.

She’s also 11 years old. The Ghana native, known to many as “DJ Switch” — because she says she can switch someone’s mood from sad to happy — turned her love for music into a serious hobby when she was just 9.

Tandoh tells CNBC Make It that at the time, she was passionate about poetry, and had been planning to compete as a spoken-word poet on a popular show on Ghanaian network TV3 called “Talented Kidz.” But after her parents encouraged her to consider something more “extraordinary” for her appearance on the show, she decided to focus on music. Her parents introduced her to a DJ who taught her about how to use turntables and mix songs.

“They hired a DJ to train me,” Tandoh says, “and by God’s grace I used five days to learn how to DJ and then went for the audition.”

Tandoh’s win earned hers significant popularity, both locally and internationally. In 2018, she became the youngest person ever to win “Discovery of the Year” at the Ghana DJ Awards. That same year, she caught the attention of billionaire philanthropists Bill and Melinda Gates, who invited her to perform and speak at their foundation’s Goalkeepers event in New York City, which brings together global leaders to discuss fighting poverty and inequality.

“They sent me an email,” she says. “It was so fantastic, DJing and making people dance.”

Earlier this year, Tandoh’s turntable skills received recognition from Jay-Z’s entertainment company, Roc Nation, which spotlighted the DJ’s talent on their social media pages for Black History Month. In May, she performed with Grammy-winning artist Wyclef Jean at a New York gala for the non-profit organization Room to Read.

Though Tandoh has found plenty of fans as a DJ — including more than 48,000 subscribers to her YouTube channel, more than 200,000 followers on Instagram and more than 14,000 followers on Twitter — the 11-year-old says that her ultimate goal is to become a doctor.

“I want to be a gynecologist,” she says, “to help the women in my community make delivery easy.”

She also wants to help improve education opportunities for young girls around the world, something she’s focused on through her DJ Switch Foundation. According to the Global Partnership for Education, there are an estimated 131 million girls worldwide who do not attend school because of financial barriers and gender discrimination.

Tandoh, who has visited local hospitals, orphanages and schools in Ghana to donate supplies, says she finds it “heartbreaking when you go to some schools and you see that they don’t have chairs to sit on — so I use my DJ Switch Foundation to help.”

Whether as a DJ or a doctor — or whatever the future may hold — Tandoh’s top priority is inspiring young people, especially girls.

“You are not too young to achieve your dreams, no matter the situation you find yourself in, the circumstance or surrounding,” she says. “Whether you are old or young, see yourself as a great person, because you can achieve anything.”

Related Topics:DJ Switch
Up Next

TV3 is not only best in new and entertainment, but best in rewarding its staff too. END_OF_DOCUMENT_TOKEN_TO_BE_REPLACED

The Ave Maria School has launched its 40th-anniversary celebration by urging school leaders to provide better opportunities and platforms for interaction with students in order to guide them in their education. END_OF_DOCUMENT_TOKEN_TO_BE_REPLACED