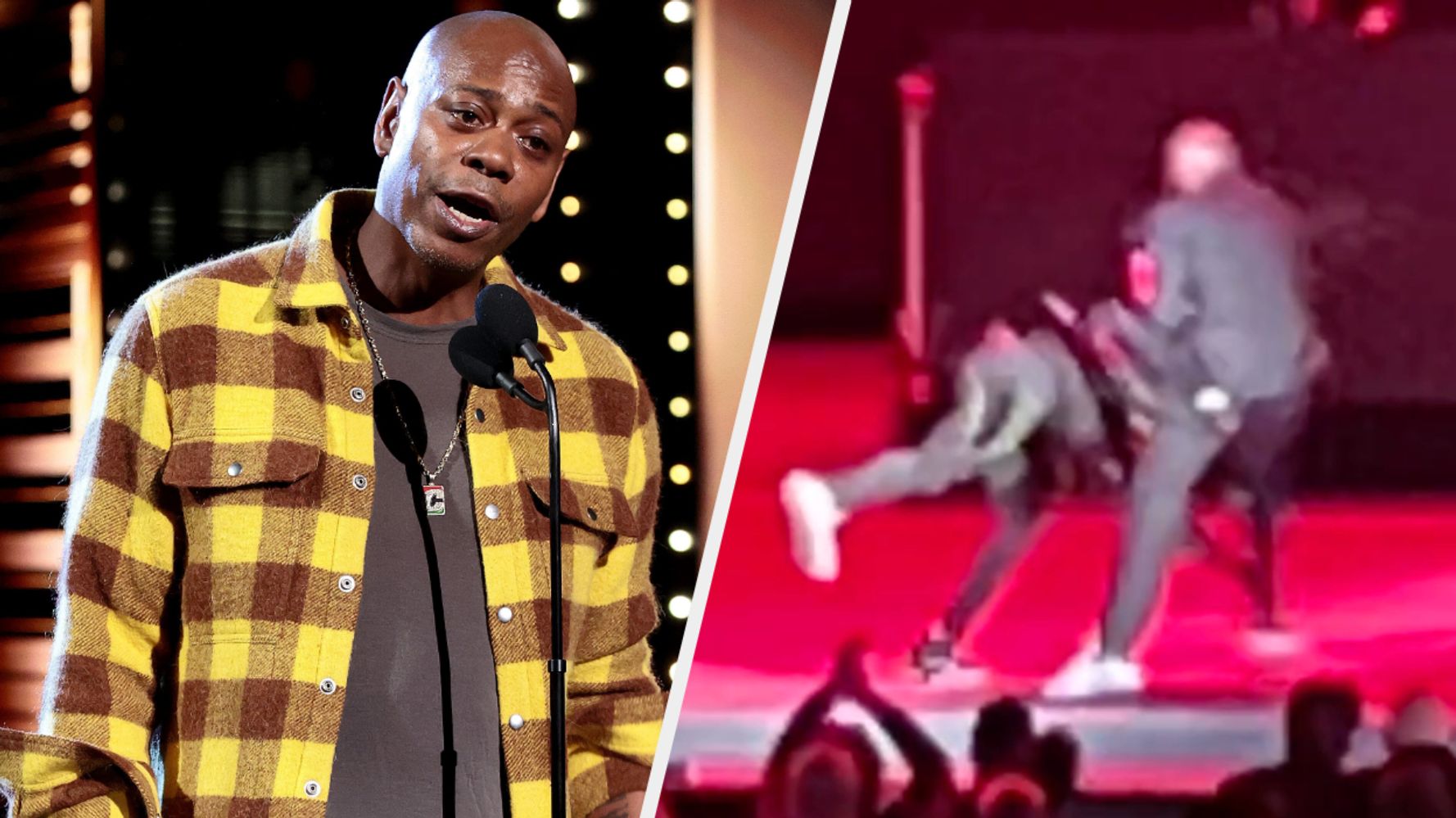 American stand-up comedian, Dave Chappelle was attacked while performing a Netflix comedy show in Los Angeles on Tuesday night, May 3.

Video from the Netflix Is A Joke event shows a man charging onto the stage and tackling the comedian before being dragged off by security. Chappelle appeared to be uninjured and continued with his set, joking: ‘It was a trans man’.

Jamie Foxx, who was watching the show at the Hollywood Bowl wearing a sheriff’s hat, rushed on stage to help detain the attacker.

Chris Rock, who later performed at the event last night came on stage and joked: ‘Was that Will Smith?’ after his own violent outburst on stage at the Oscars in March

After the attacker was detained, Chappelle thanked Foxx on stage during the curtain call.

He said: ‘Shout out to Jamie Foxx by the way. Whenever you’re in trouble, Jamie Foxx will show up in a sheriff’s hat.’

Foxx replied: ‘I thought that was part of the show, I didn’t know what the f***…’

Chappelle said: ‘I grabbed the back of that n**** head. His hair was spongy. Absorbent.’

Foxx added: ‘Listen, I just want to say, this man is an absolute genius. We’ve got to make sure we protect him at all times.

‘For every comedian who comes out here, this means everything. You’re a genius. You’re a legend, I enjoyed myself thoroughly, and we’re not going to let nothing happen to you.’

Chappelle said: ‘I’ve been doing this for 35 years. I just stomped a n**** backstage. I’ve always wanted to do that.’

After the attack, Jimmy Carr shared a selfie taken with the fellow comedian and described his Los Angeles show as ‘crazy’.

Chappelle came under fire last year over jokes about trans people in his Netflix comedy show The Closer.

During the controversial special, he made one comment stating that ‘gender is a fact’, prompting Netflix staff to protest and mass outrage on social media against some of his jokes.

In the special, he stated that he does not hate transgender people, and tells a long anecdote about a trans woman comic, who he describes as a friend, who came to his defense in earlier entanglements with the community.

The attack comes weeks after Will Smith attacked Chris Rock on stage at the Oscars. The actor slapped the comedian on stage after a joke about his wife Jada Pinkett-Smith’s shaved head. Pinkett-Smith has been open in the past about her struggles with alopecia.

Andy Goram has died at the age of 58 after a short battle with cancer. END_OF_DOCUMENT_TOKEN_TO_BE_REPLACED

A woman who went viral 2 years ago for marrying the man who caught the garter after she caught the bouquet at their friends’ wedding, has shared an update on their marriage. END_OF_DOCUMENT_TOKEN_TO_BE_REPLACED

Liverpool star, Mohamed Salah has committed his future by signing the biggest deal in the club’s history. END_OF_DOCUMENT_TOKEN_TO_BE_REPLACED

R. Kelly has been placed on suicide watch at the federal detention facility in Brooklyn where he is being held following his sentencing to 30 years in prison on racketeering and sex trafficking charges. END_OF_DOCUMENT_TOKEN_TO_BE_REPLACED

A new photo of Nipsey Hussle’s murder suspect Eric Holder has surfaced online following reports that the alleged killer was attacked in his holding cell. END_OF_DOCUMENT_TOKEN_TO_BE_REPLACED