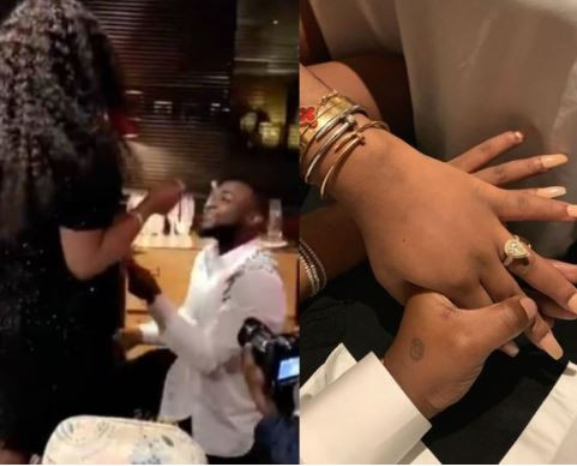 Nigerian musician Davido has finally proposed to Chioma, his lover and soon-to-be mother of his child last night in London.

The two who officially had their family introduction earlier this month were joined by close friends and family at a restaurant in London.

Watch the moment Davido went down on one knee to propose to his “Assurance” below.

The proposal. Big congrats to Chioma and Davido

Davido has been dating Chioma for over five years and in 2018 they broke the internet when he bought her a brand new Porsche SUV to celebrate her 23rd birthday.

See the huge the engagement ring the ‘Assurance’ hitmaker popped the question with.

Continue Reading
Advertisement
You may also like...
Related Topics:Chioma, davido

2019 All Africa Music Awards to be hosted in Lagos
WATCH: ‘We weren’t in a relationship’ – D-Black reacts to Princess Shyngle’s dating claims
Advertisement
Advertisement