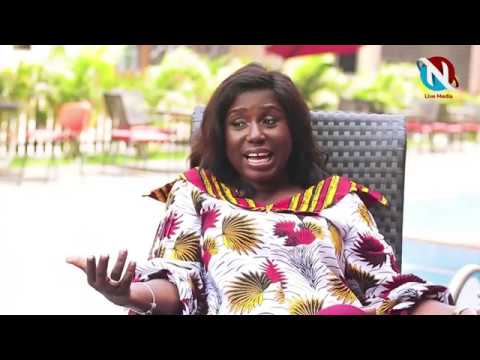 After welcoming her first child after five years of marriage, gospel musician, Diana Hamilton has revealed how emotionally draining been asked the “when are you giving birth” question can be.

The multiple award-winning singer, in an interview with NY DJ on BTM Afrika, narrated the ordeal she went through during her first five years of marriage without a kid.

“At the end of every month, I cried, so you can imagine for five years because I gave birth almost 6 years into marriage but I was very quick enough to wipe it off and tried every month. However, I am a woman of God and not a God of a woman so the human side of me will come in and so I will be sad” she told host, NY DJ.

Diana, who has been blessed with twins, advised against asking married couple when they are going to have kids.

According to her, there could be so many reasons why couples have not been able to conceive after years of been together.

“Don’t give people unnecessary pressure! It’s either they are trying and it’s not happening or they have no plans of having kids but not yet or they are battling with the emotional stress of experiencing a miscarriage. Don’t freshen up a wound that is closing up and so let’s stop it,” she warned.

Diana Hamilton released her debut album in 2007 titled, “Osoro be kasa.” However, her second album “Ensi wo yie”, released in 2010, gained her prominence in the Ghanaian Gospel Music Industry.

She has since won several awards including the coveted “Gospel Artist of the year” award at the Vodafone Ghana Music Awards.

“Secular acts are not of the devil”- Grace Ashy

The voting portal for the 2022 edition of the All Africa Music Awards (AFRIMA) opened to the public on Sunday, 25 September at 21:00 (CAT), to decide the winners of each of the 39 award categories, globally. END_OF_DOCUMENT_TOKEN_TO_BE_REPLACED

Ghanaian actress, Yvonne Nelson has issued an apology on behalf of Ghanaians to Stephen Appiah and his Black Stars colleagues. END_OF_DOCUMENT_TOKEN_TO_BE_REPLACED

Professor Elsie A. B. Effah Kaufmann, host of the popular National Science and Maths Quiz has shared a bit of her private life. END_OF_DOCUMENT_TOKEN_TO_BE_REPLACED

As the only Ghanaian female artist to perform on the Global Citizen Festival stage at the Black Star Square last night, Gyakie did an incredible job representing the country and doing her part in being a contributing voice for global change. END_OF_DOCUMENT_TOKEN_TO_BE_REPLACED

Although Ghanaians appreciate Professor Elsie A. B. Effah Kaufmann as the Quiz Mistress of the popular National Science and Maths Quiz, there are other things that they love about her. END_OF_DOCUMENT_TOKEN_TO_BE_REPLACED