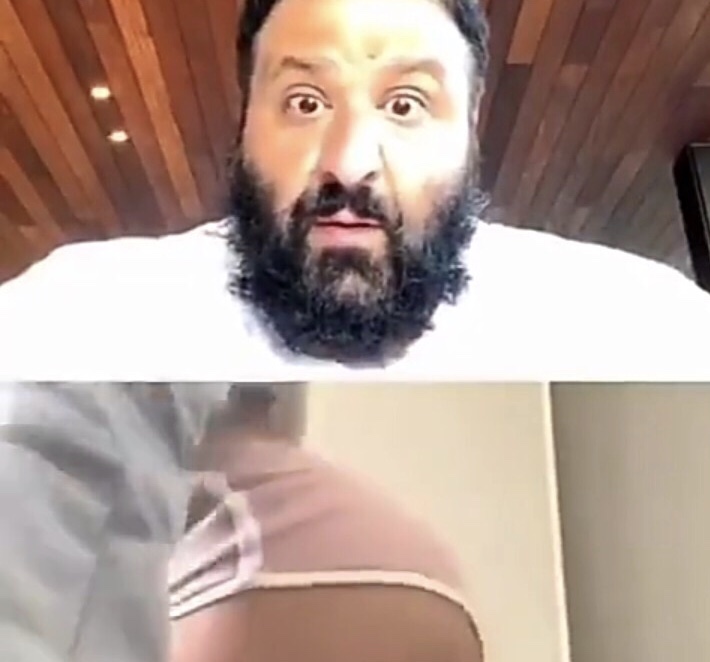 Just like many other celebrities, DJ Khaled decided to hop on Instagram Live to connect with his fans and have a one-on-one interaction with them.

Unfortunately, things didn’t go as planned for the popular DJ as his live interaction soon turned R-rated when one of his followers decided to twerk for him while she was live with him.

The 44-year-old producer was tongue-tied when he saw a woman in a tiny bikini and hot pants twerking for him. He just kept mumbling, “oh s**t, oh s**t, I can’t”. He then went on to remind the woman that he is a family man while she continued with her twerking. She then proceeded to pour water on her backside while twerking while Khaled shut his eyes and kept saying “talk to me normal”. When the woman showed no signs of slowing down or stopping her twerking, the ‘I’m the one’ singer just ended the session.

Fans loved the way he handled the situation and reacted to the woman trying to seduce him. A fan tweeted, “Name one person more wholesome than DJ Khaled.”

“Anyone clowing DJ Khaled for his reaction to that IG Thottie has never been married or in a committed relationship. When you got a good one you ain’t tryna lose it for no bench warmers. Them h**** will try it but his actions were warranted,” expressed a fan. Another fan wrote, “How she do this to DJ Khaled in Ramadan? His reaction is the best thing ever.”

Another fan declared, “Dj Khaled is the family man of the year.”

“If y’all wanna have an honest conversation, we can discuss how this is sexual harassment and Khalid is a victim but y’all can continue to laugh since khaled is a man,” pointed out a fan. Another fan wrote, “DJ Khaled is a mood. He stopped the girl from twerking. What a man!!!”

Related Topics:DJ Khalid
Up Next