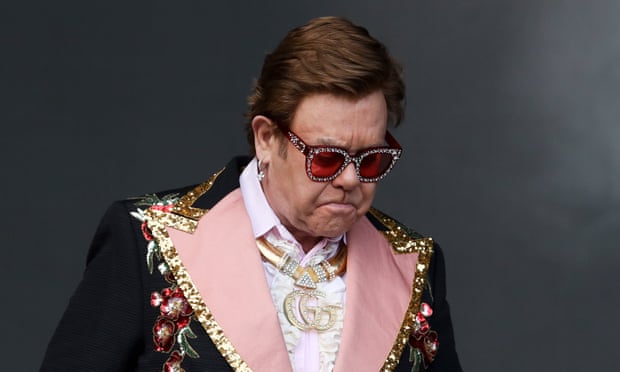 Elton John broke down in tears on stage when he had to end his concert in New Zealand early due to losing his voice after being diagnosed with pneumonia.

Elton John, 72, had a heartbreaking moment on stage during his Feb. 16 concert in Auckland, New Zealand when he was forced to stop the show early due to literally losing his voice in the middle of singing a song. The legendary singer broke down in tears as he stepped away from his piano and apologized to the massive cheering crowd before leaving the stage. He took to his Instagram after the concert to thank his fans and admit that he was diagnosed with “walking pneumonia” earlier in the day and is “deeply upset” that he had to cut the show short.

“I want to thank everyone who attended tonight’s gig in Auckland. I was diagnosed with walking pneumonia earlier today, but I was determined to give you the best show humanly possible,” Elton wrote in the caption for a pic he posted from the show. “I played and sang my heart out, until my voice could sing no more. I’m disappointed, deeply upset and sorry. I gave it all I had. Thank-you so much for your extraordinary support and all the love you showed me during tonight’s performance. I am eternally grateful. Love, Elton xx.”

Before his show in New Zealand, Elton was spotted at the 2020 Academy Awards on Feb. 9 and an onlooker told us he was already looking under the weather. “Backstage at the Oscars Elton was seen shuffling and walking slowly,” the onlooker EXCLUSIVELY told HollywoodLife. “He looked sick and it was a drastic difference from how he looked even a short year ago. He seemed to struggle just taking small steps. It was clear he was not his usual self or feeling very well.”

There’s no word yet on whether or not Elton is planning on booking another date in Auckland. He’s been on his final tour, the Farewell Yellow Brick Road tour, since 2018 and is scheduled to have another show in Auckland on Feb. 18.

Watching this beloved man break down in tears onstage has my heart in shambles. He tried to push through a NZ show despite PNEUMONIA until he lost his voice and couldn't. He was visibly devastated. His love and loyalty despite his own suffering has my heart bursting. As if it were possible to love him more. Get well soon, Elton. ❤💔 And bless the people of NZ from whom I have seen only praise, support, and positivity for Elton. The love is overflowing. ❤ – – – #eltonjohn #mymuse #rocketman #captainfantastic #madmanacrossthewater #thebitchisback #serendipitous_musical_genius #icon #legend #beautifulman #musicisart #artislife #eltonfarewelltour #farewellyellowbrickroad

Related Topics:Elton John
Up Next