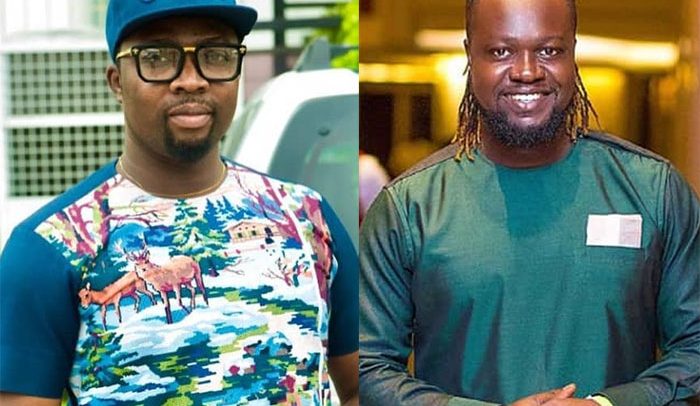 It was an emotional moment on the stage of the 2019 Golden Movie Awards when popular film director, Frank Rajah used the opportunity for a speech to send his heartfelt apology to actor Eddie Nartey.

The director, who was an integral member of Abdul Salam’s Venus Production back in the day said, his decision was borne out of immaturity. When given the opportunity to say a few words after Abdul Salam Mumuni received a citation for the ‘WALK OF FAME’, Frank took to the podium to sough forgiveness from actor Eddie Nartey.

“I really don’t have much to say but I will like to apologize to someone I might not have the privilege to probably tell my mind. One of six actors who I intentionally pushed his career a little low. From the depths of my heart, I say Eddie Nartey I AM SORRY.”

After a loud cheer from the audience, Eddie Nartey stood to salute Frank Rajah and then walked on stage to hug him.

In response, Eddie Narty disclosed that he has no reason to be angry with the ‘Princess Tyra’ director. He mentioned that he has forgiven him for whatever wrong he did to his career because he loves and respects him.

For those of you who keep bombarding me with a lot of questions about what I did to Frank Rajah following his confession at the past Golden Movie Awards, I’m as clueless as you but perhaps this video will give you answers. I admire his guts to have made those confessions on that platform. For me He mentioned it sometime ago when I invited him over to Zylofon Arts Club to speak with my students. That day, I cried, I was devastated, I couldn’t sleep. I asked a thousand questions what I had done to him but got no answer. But I thank God that like a tuff seed, I grew. I will forever love and respect Frank. I have learnt a lot from him as an actor and a director. I’ve forgiven him already that is if there is any. I know there are a lot of people who still despise me in this game just because of the falsehood, untrue, cooked stories others have told about me. But hey, Man Proposes, God Opposes.