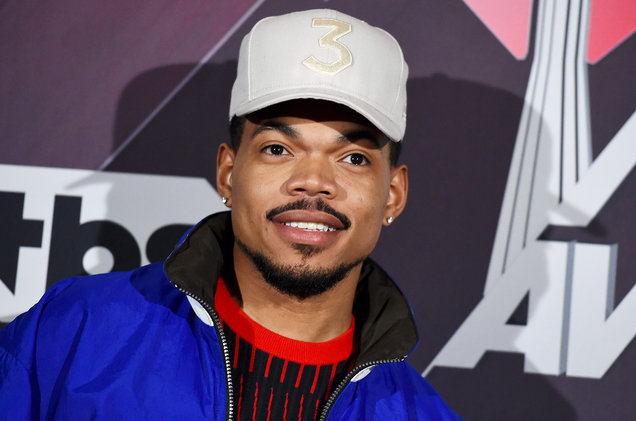 According to The Chicago-based rapper part of the song was created during his visit to Ghana in January this year.

‘I wrote part of the song in Ghana on my travels I ran into this amazing artist called Moses Sumney I know him from the states Moses is one of the greatest artists of our generation he’s a Ghanaian American artist and he was in Ghana at the same time hence I went by his crib and we recorded some vocals for the record’ he said.

Chance also spoke about meeting a Gabonese artist, Naila Opiangah, in Ghana whose painting shaped the way he presents his new song, “Child of God.”

On how he was inspired by Naila’s painting, The 3-time Grammy-winning rapper said:  ”The original title of the song was ‘Do Your Thing Child’ but after seeing this finished 6ft x 12-foot giant beauty of work with all these bodies ascending I had the idea to change the song title I was inspired by her to change the title of the piece to Child of God which is very radical” he explained.

Fotocopy takes his ‘school dey be’ tour to South Africa

Ghanaian rapper, Kwaw Kese has reacted to the trending purported copy of a will of Kwadwo Owusu Afriyie, popularly known as Sir John. END_OF_DOCUMENT_TOKEN_TO_BE_REPLACED

Nigerian actress, Eucharia Anunobi, has revealed she urgently needs a man to settle down with. END_OF_DOCUMENT_TOKEN_TO_BE_REPLACED

General Manager of GhOne TV, Nana Aba Anamoah and Broadcaster, Serwaa Amihere have chided supporters of the New Patriotic Party (NPP) for defending the purported copy of a will of Kwadwo Owusu Afriyie, popularly known as Sir John. END_OF_DOCUMENT_TOKEN_TO_BE_REPLACED

Kourtney Kardashian and Travis Barker have got married – again. END_OF_DOCUMENT_TOKEN_TO_BE_REPLACED