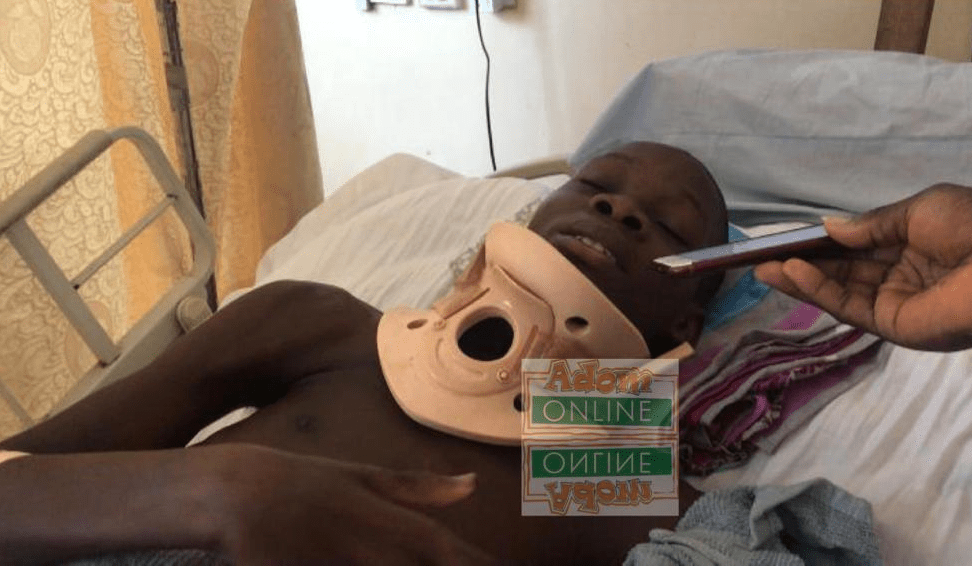 Frank Arhin, one of the fans who were injured at Medikal’s concert last December is in critical condition at the Korle-Bu Teaching Hospital and calling for help.

Frank Arhin has developed a huge sore on his buttocks as the blood-flow in his arms has slowed, according to doctors and he can no longer breathe properly or walk.

Reports from the concert suggest the show which had acts likes Shatta Wale, DJ Switch, King Promise, Joey B among others performing witnessed the fall of some fans who were standing close large speakers that fell on them.

Frank was one of the unfortunate victims of the speakers’ fall.

According to Mr Arhin, who is in a critical condition at the Korle-Bu Teaching Hospital, event though he’s going through a lot, Medikal and the organiser of the concert, has ignored him and not reached out to help.

A weeping Frank revealed that some of his hospital bills are yet to be settled even as he struggles to feed himself.

Apart from having a sore at his back, Frank cannot urinate because his sexual organ has also been compromised hence he urinates through a tube inserted into his manhood.

The boy, whose parents have passed on and is really in need said he would be grateful if the public comes to his aid because he’s paralyzed as a result of the accident.
“I have been at Korle Bu Hospital for the past 4 months and I have no one to pay my bills,” he said.

Global streaming giant Spotify is proud to announce that Sio has been selected to join the EQUAL Africa programme aimed at spotlighting female artists across the continent. END_OF_DOCUMENT_TOKEN_TO_BE_REPLACED

UK-BASED Ghanaian Gospel musician, Joe Bamfro has been nominated in the Gospel Song of The Year category in the upcoming Ghana Music Awards UK(GMA UK) scheduled for October in the United Kingdom.
His song Moko Be did the trick for him and Joe Bamfro is besides himself with excitement being the first time he has ever been nominated in an awards scheme. END_OF_DOCUMENT_TOKEN_TO_BE_REPLACED

Organizers of the prestigious Ghana National Gospel Music Awards have announced a date for the most anticipated event. END_OF_DOCUMENT_TOKEN_TO_BE_REPLACED