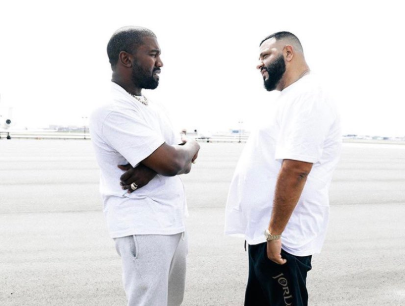 Generous Kanye West gifted DJ Khalid a pair of the unreleased Yeezys when the two linked up on Sunday.

DJ Khaled met Kanye on an airport tarmac as they were both about to board their respective private jets and Kanye took off his shoes – an updated version of the adidas YEEZY 700 V3 – and gave them to DJ Khaled.

Despite being tied to Nike and Jordan Brand, Khaled graciously accepted the shoes.

DJ Khaled shared the encounter via his Instagram Stories and talked about his yeezy boost 500 supply.

Kanye giving DJ Khaled the Yeezys off his feet at the airport today. 🎥 @djkhaled pic.twitter.com/6KVf2XPjU1

Drake to fly young Nigerian, who has been tagging him on Instagram since 2018, to his concert

Ghanaian rapper, Eno Barony has stated that it has never been her intention to make”controversial” music. END_OF_DOCUMENT_TOKEN_TO_BE_REPLACED

The MELCOM Group of Companies has opened its newest branch, a three-story Superstore at East Legon on the Boundary Road, opposite the Gethsemane Cemetery in Accra. END_OF_DOCUMENT_TOKEN_TO_BE_REPLACED

Ghanaian actress, Nana Ama Mcbrown has recently shared a post on her Instagram page with a caption that has infused worry among her followers. END_OF_DOCUMENT_TOKEN_TO_BE_REPLACED

Popular Nigerian media personality, Toke Makinwa has disclosed that she was robbed in London, Uk. END_OF_DOCUMENT_TOKEN_TO_BE_REPLACED