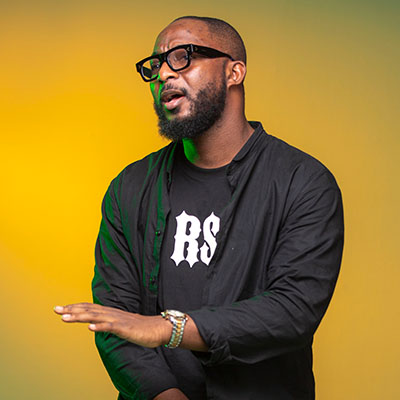 Although Mr Whyte has now cemented his name as one of the popular radio presenters in the country, the journey has not always been smooth.

In an exclusive interview with Ameyaw TV’s Zeinat, Erskine narrates the journey to his media stardom.

According to the now father of one who hails from Kumasi, his love for radio began so many years ago, even before he went to the university.

“I started chasing radio even before I went to Uni. I had a grand plan before coming to Uni. Kumasi was tough. I needed to get out to put my plan in motion,” he tells Zeinat.

Even though Erskine knew the career path he wanted to pursue, his family wanted something different from him; to take his studies seriously.

“The family I was in wasn’t into that so I had to hide,” he reveals.

After finally gaining admission to the University of Ghana to study Economics and Political Science, Erskine took the opportunity to chase his radio dreams.

I found myself in Accra and the forces that were against this were no longer in sight so I started doing anything to get the attention. I used Twitter to promote songs and gain some traction,” Erskine narrates.

A couple of years after forming relationships, Rev Erskine reveals he was introduced to Joel Orleans, who mentored him and gave him opportunities to succeed.

“I got on radio officially in 2014. A friend introduced me to Joel Orleans. I became his P.A and produced his campus radio show. And then in 2015, Joel had a promotion and his spot was open so I offered to take it. I was so bad and awful on my first day on radio.”

After diligently learning on the job and from his mentor, Mr Whyte finally secured a place as an official employee at YFM in 2015. Since then, he has been unstoppable.

Ghanaian actor and socialite, Don Little, has made a passionate appeal to his colleague Kwadwo Nkansah also known as Lilwin to go make peace with his ex-wife. END_OF_DOCUMENT_TOKEN_TO_BE_REPLACED

The Federal Government of Nigeria has taken legal actions against the husband of late gospel singer, Osinachi Nwachukwu. END_OF_DOCUMENT_TOKEN_TO_BE_REPLACED

From being the opening act at EL’s BAR VI concert to bagging a nomination at the 2022 3 Music Awards, Afrobeats/afro soul singer Darkua stopped by Ameyaw TV to talk about her musical journey. END_OF_DOCUMENT_TOKEN_TO_BE_REPLACED