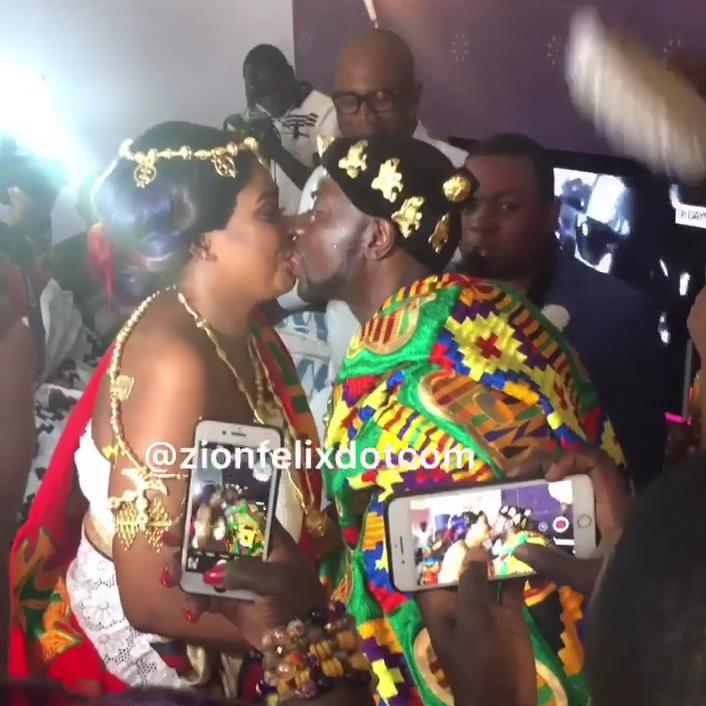 Kumawood actress, Gladys Boaku, popularly known as Nayas has secretly tied the knot with her newfound love in a beautiful traditional wedding today.

According to a post by blogger ZionFelix on his Instagram page, the man is a “German borga” who flew down to marry the actress. The wedding which is happening today Friday, September 20, 2019, was attended by many movie stars and entertainers.

Among those spotted at the wedding were Pamela Odame Watara, Brother Sammy, Adjowa Smart, Afia Schwarzenegger, Christiana Awuni, Maame Gold among others.

The actress last year stormed the studios of Adom FM to lash gospel musician Ernest Owusu for denying her publicly.

Ernest Opoku had admitted in a previous interview of making a mistake by having an affair with the actress which resulted in a pregnancy.

She was also in the news for lying about been married to fellow Kumawood actor, Apostle John Prah after the two just took photos for a movie poster.

Watch: I’m better and handsome than most of your ‘sugar daddies’ – Apostle John Prah jabs Nayas

Watch videos from the ceremony below.

Put the ring on! Nayas taking the engagement ring from hubby

What a time to be an African! On the back of a successful Global Citizen Festival in Accra, and a visit of  Recording Academy CEO, Harvey Mason Jr to Ghana, his first trip to West Africa, it appears that Afrobeats may soon get its individual shine at the Grammys! END_OF_DOCUMENT_TOKEN_TO_BE_REPLACED

The School of Graduate Studies of the University of Professional Studies (UPSA) has honoured Ghanaian musician, Rebecca Acheampong known popularly as Becca for her outstanding academic achievements. END_OF_DOCUMENT_TOKEN_TO_BE_REPLACED

Platinum selling artist, KiDi has reacted to the resurfacing of his old tweets on the social media platform. END_OF_DOCUMENT_TOKEN_TO_BE_REPLACED