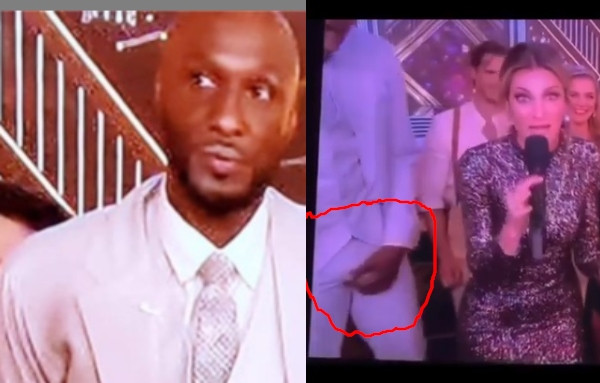 Lamar Odom is getting called out for scratching his private parts on live television on “Dancing with the Stars” Monday night.

The former NBA star did not realize the cameras were pointed in his direction when fellow contestant Hannah Brown went to talk to host Erin Andrews.

In a clip, posted on Twitter, Odom, 39, is seen readjusting his pants behind Andrews.

What the heck is Lamar Odom doing??? #DWTS pic.twitter.com/zt8Hn2tRVn

“What the heck is Lamar Odom doing???” one person asked.

Another joked, “Lamar Odom is going to get a higher score for making his pecker dance on #DWTS than for what he can do with his other two legs.”

At the end of the show, Odom and his partner, Peta Murgatroyd, were eliminated. They received the lowest combined score and number of fans votes, alongside Karamo Brown and his partner Jenna Johnson.

This season, Odom struggled to pick up the dance routines and received some of the lowest scores. However, he said he enjoyed getting out on the dance floor because it was “therapeutic.”

#TheSarkEffect: Chance The Rapper hints on visiting Ghana this year