Thousands of protesters in the Sri Lankan capital Colombo have taken over the president’s residence.

Ghana and Sri Lanka pay interests on their national debts than any country in the world.

Both countries have gone for IMF 16 times in the past

Sri Lankan protesters just broke into their presidential villa and seen swimming in blue pools to cool off. pic.twitter.com/aMXABOt4zx

The island of 22 million is suffering a severe foreign exchange shortage that has limited essential imports of fuel, food and medicine, plunging the country into the worst financial turmoil in seven decades. 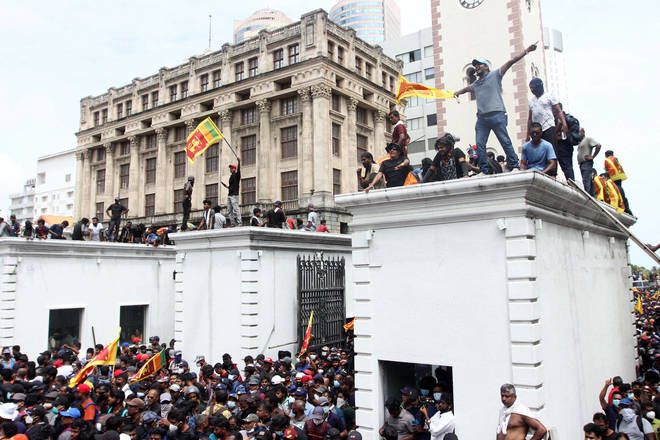 Scores of protesters jump into the president’s swimming pool after storming his house, while others roamed across the overlooking balcony.
Rajapaksa is believed to have been moved from the official residence on Friday July 8, over safety concerns.

Protesters blame Mr Rajapaksa for the economic woes and they have occupied the entrance to his office building for the past three months calling on him to step down. 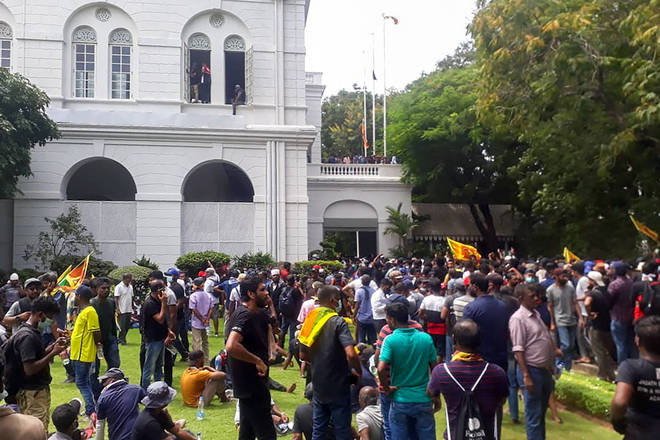 Video posted on social media showed hundreds of protesters running into the president’s residence, chanting “Gota go home”, calling the president by his nickname. Outside the building, barricades were overturned.

At the president’s office, security personnel tried to stop protesters who passed through the fences and stormed the colonial-era parliament building, which has been converted into his office.

At least 34 people including two police officers were injured in scuffles as protesters tried to enter the residence. Police fired tear gas at protesters.

Two of the injured are in a critical condition while others have sustained minor injuries, hospital officials said.

Nigerian nightclub owner and accomplice get 15 years imprisonment in South Africa for defrauding property traders of over $650,000

19-year-old Florida rapper Smokingskul has just shared his new single and video “Nina”. Smokingskul is at the helm of a new era of plugg music known as “dark plugg”which substitutes the ethereal sounds of “plugg” with more tonal melodies that are accentuated by distorted percussion, producing a grimey, DIY sound. END_OF_DOCUMENT_TOKEN_TO_BE_REPLACED

Drake officially has more slaps than The Beatles. END_OF_DOCUMENT_TOKEN_TO_BE_REPLACED

Swizz Beatz and Timbaland have filed a lawsuit against Triller, claiming the company still owes them $28 million for the sale of their Verzuz series. END_OF_DOCUMENT_TOKEN_TO_BE_REPLACED

Two well-known Italian ‘trappers’, a type of rap music, have been arrested for a suspected racially motivated attack on a Nigerian factory worker near Monza in Rome. END_OF_DOCUMENT_TOKEN_TO_BE_REPLACED