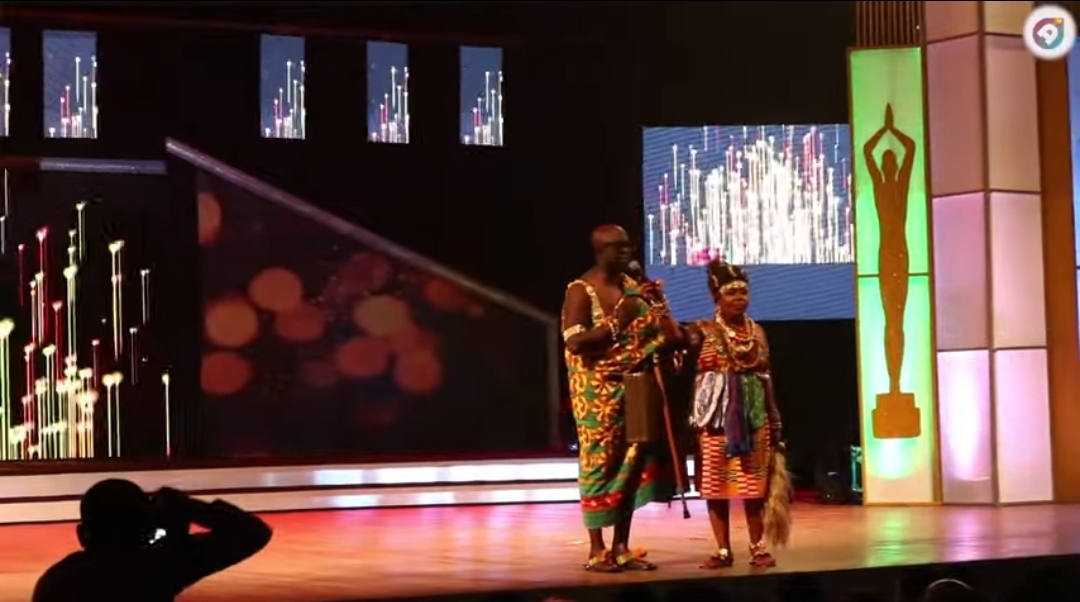 The 2019 edition of the Ghana Movie Awards which was held at the National Theater on 20th December 2019 was not short of controversies and AmeyawTV captured it all.

The red carpet which was scheduled to start at 6pm, started at 9pm and ended around 11pm. The show officially started around 12:10pm with host Afia Schwarzenegger making her royal entrance and had the crowd laughing with her monologue.

The topmost issue that prevented the success of the show was the sound technician’s decision to ‘kill’ the sound just as the MC for the event came on stage due to a debt owed him by the organisers.

The technician insisted that he be paid some arrears amounting to GH¢1,500 before he provides sound for the occasion.
Resorting to mobile money transaction, the organisers took the sound technician’s registered number and sent him one thousand Ghana cedis. Unmoved by the attempt made, the sound technicians insisted he is paid fully.
The organisers eventually added the remaining five hundred Ghana cedis and there was sound!
Other incidents which impaired the event organized by Fred Nuamah included the low patronage.
Also, at some point, the playbacks announcing the nominees for various categories failed to play.
Interestingly, actors who were nominated for some categories were asked to present awards to colleagues who beat them to it.

Watch the exclusive highlights from the night in the video below.

Watch: My acting career is on hold because of my education – Rahim Banda

Chris Fonye popularly known as “Hydraulix Fonye” is a Ghanaian producer, sound engineer, songwriter and singer with a vast experience in the Ghanaian entertainment industry. END_OF_DOCUMENT_TOKEN_TO_BE_REPLACED

Although there may be hundreds of afro-beats artists in the country, Highly Spiritual Music signee, Lasmid believes he is unique. END_OF_DOCUMENT_TOKEN_TO_BE_REPLACED

Highly Spiritual Music signee, Lasmid, has stated that he wasn’t expecting his song “Friday night” to reach such great heights within a short time frame. END_OF_DOCUMENT_TOKEN_TO_BE_REPLACED

The 2023 African Cup of Nations, AFCON initially scheduled for Côte d’Ivoire next June will now be held in January and February 2024 due to the concerns over the rainy season in the country. END_OF_DOCUMENT_TOKEN_TO_BE_REPLACED