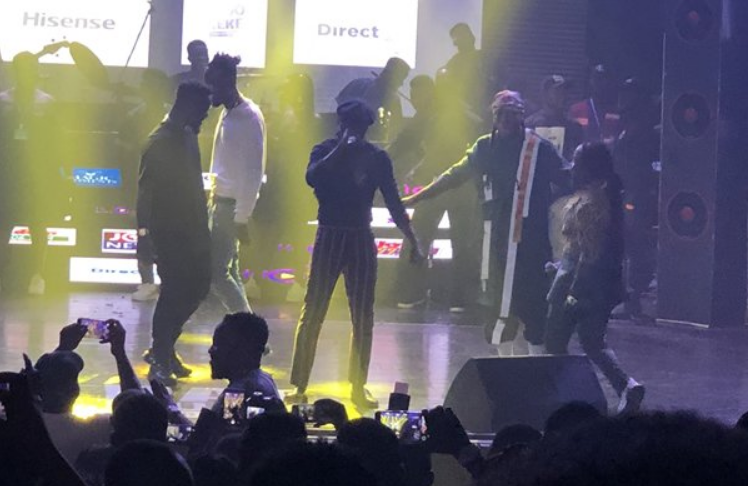 The event which was to celebrate 20 years since the release of his debut album ‘Pae Mu Ka’ saw lots of Ghana’s entertainment industry players in attendance.

KOD and BBNaija star Alex Unusual were the hosts of the night.

Samini, midway through his performance, paused to eulogise Obrafour and his talent.

“Obrafour inspired people like me and a whole lot of Ghanaian artistes and we are on here today to make sure we make the world know what people like Obrafour did,” Samini said on stage.

The highpoint of the night was when Sarkodie joined Obrafour on stage. Just when many thought they had seen it all, ‘hiplife grandpapa’ Reggie Rockstone, who is credited for starting hiplife, also joined them on stage.

After Reggie had joined the two, Kwaw Kese also appeared on stage and then Edem also followed.

That performance got every soul at the AICC on their feet.

Obrafour, even though the night was about him, paid a glowing tribute to the late Ebony Reigns, Terry Bonchaka and Ronnie Coaches of Buk Bak fame.

Pete Edochie replies lady who called him a ‘bad actor’

Ghanaian rapper, Okyeame Kwame has opined that the new crop of rappers in the industry are far “better” than him and others who have been in the game for two decades. END_OF_DOCUMENT_TOKEN_TO_BE_REPLACED

Ghanaian rapper, Sarkodie may be gearing up to speak against the governance of the nation by the ruling New Patriotic Party (NPP). END_OF_DOCUMENT_TOKEN_TO_BE_REPLACED

Ghana’s social media has been buzzing after a video showing a young  Ghanaian in police escort to go and buy a burger went viral! END_OF_DOCUMENT_TOKEN_TO_BE_REPLACED

Broadcast Journalist at Metro TV, Bridget Otoo has come after employers who fail to pay their workers, yet live lavishly. END_OF_DOCUMENT_TOKEN_TO_BE_REPLACED