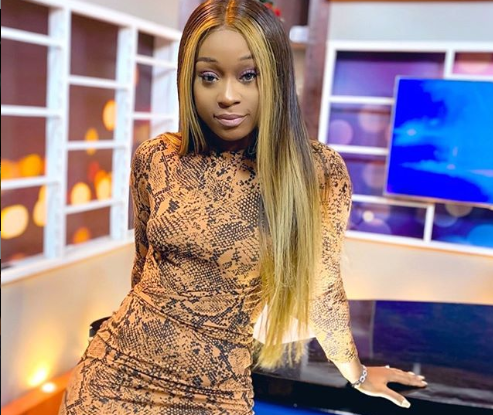 Actress and TV personality Efia Odo is unhappy that a lot of Ghanaians always have a misconception about her relationship with some male celebrities.

The actress in an interview with Zionfelix noted how some Ghanaians started spreading rumours about who she dated and slept with.

Hitting back at them, the curvy actress said that Ghanaians like to associate themselves with sex, because it’s the only thing they think about.

“Ghanaians are always saying I dated Kwesi Arthur, had sex with him and then we two broke up. They also said I had a thing with King Promise and Darko Vibes, all because I shot music videos with them. I mean, can’t a male and a female be friends without people thinking about anything sexual?

“I think in Ghana when somebody says they have a crush on someone they automatically think you want to be in a relationship with the person and have sex. You can crush on someone because of their personality. It’s always about sex, that means sex is the only thing Ghanaians have in mind. Ghanaians like sex, they like sex too much.” She said.

Viola Davis makes a stunning transformation in the new trailer for ‘The Woman King’, in which she plays Nanisca, leader of the all-female warriors known as the Agojie. END_OF_DOCUMENT_TOKEN_TO_BE_REPLACED

African-American businessman and jet broker Kelvin Mensah, popularly known as PJKev has added his voice to the many people against the building of the National Cathedral. END_OF_DOCUMENT_TOKEN_TO_BE_REPLACED

Nigerian hip-hop artiste, Eedris Abdulkareem has disclosed that he is battling kidney failure and will have a surgical operation at the end of July. END_OF_DOCUMENT_TOKEN_TO_BE_REPLACED

According to reports from Nigeria, unidentified gunmen have attacked an ‘advance team’ of President Buhari’s presidential aides leading to injuries to two people. END_OF_DOCUMENT_TOKEN_TO_BE_REPLACED

Sensational highlife/afrobeat artist KiDi has said that his dream is to collaborate with Daddy Lumba on a song. END_OF_DOCUMENT_TOKEN_TO_BE_REPLACED