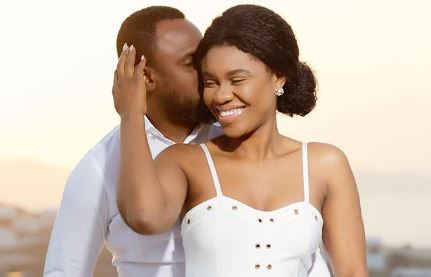 Ghanaian singer, Becca and her husband, Dr. Tobi Sanni-Daniel, have been married for a year now but before that, there was a proposal and we are now getting to see how that happened.

The couple are marking their first wedding anniversary and in that regard, a video has surfaced online of the moment the Nigerian Banking expert and Entertainment mogul, went on one knee to ask Becca to be his wife.

Mr. and Mrs. Sanni-Daniel in love messages to each other on their anniversary revealed that they’ve known each for about ten years now whilst Becca threw light on how the proposal happened.

“t’s our anniversary @drtobisannidaniel In 2015 after knowing you 7 years you took my hands at Central Park, New York looked right into my eyes and said… “Becca I know this may sound funny but given the chance, I do not want to date you, I want to marry you” I laughed in awe, it was flattering and weird at the same time. I remember blushing and still thinking hmmm this man has so much confidence.” Becca wrote on Instagram.

Continue Reading
Advertisement
You may also like...
Related Topics:becca