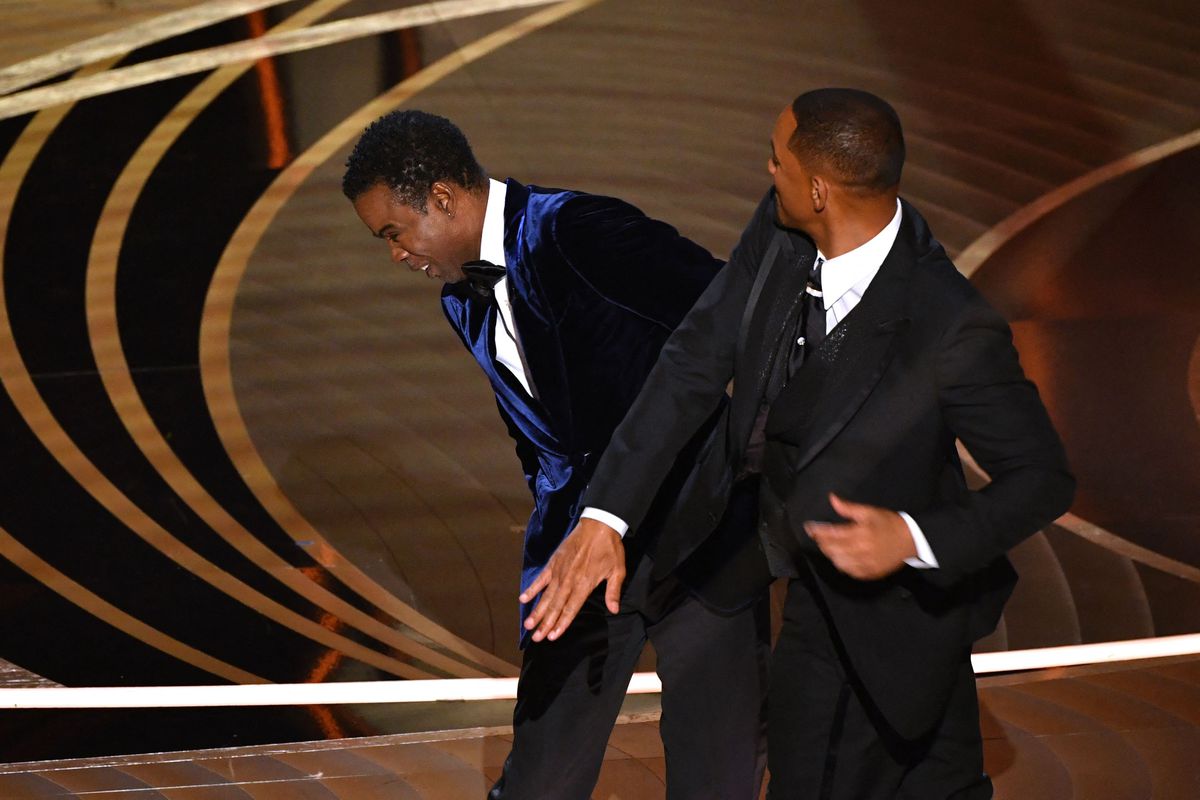 In an apparently unscripted moment that stunned viewers and audience members alike, Will Smith strode onstage and hit Chris Rock in the face after the comedian made a joke about the actor’s wife while presenting the best documentary award at the Oscars.

Rock joked that Smith’s wife, the actress Jada Pinkett Smith, was in “G.I. Jane 2,” seemingly a reference to her short-cropped hair. Pinkett Smith has said she has alopecia, a condition that leads to hair loss.

Smith yelled and cursed at Rock after returning to his seat, demanding that Rock not speak about his wife.

During the heated exchange, the telecast went silent on many screens, leaving confusion about what had happened and what had been said.

Rock, a presenter at the show, had been firing off jokes during a mini-monologue when he got around to actors and their spouses.

“Javier Bardem and his wife are both nominated,” Rock said. “Now, if she loses, he can’t win.”

The camera panned to Smith, who appeared initially to be smiling. But the joke drew a lukewarm reception, prompting Rock to add: “That was a nice one!”

Jada Pinkett Smith immediately rolled her eyes at the joke. Pinkett Smith has been open about having alopecia, posting a video on Instagram last year to explain how the hair loss had progressed. She first shared the diagnosis in 2018 on an episode of her talk show, when she said she had decided to cut her hair short after handfuls of it came out in the shower.

On Sunday, after Rock spoke, her husband was soon out of his seat. Smith walked down the runway toward the stage.

“Uh-oh,” Rock said. Smith approached, and hit Rock; the impact could be heard through his microphone.

Uncensored broadcasts of the telecast outside the United States showed that after being struck, Rock, trying to keep the mood light, acknowledged that Smith had “smacked” him, using an expletive to describe how hard he had been hit.

Back in his seat, Smith told Rock: “Keep my wife’s name out your fucking mouth!”

Smith then repeated his demand.

Looking shocked, Rock said, “That was the greatest night in the history of television,” then moved on to awarding the Oscar for documentary feature to “Summer of Soul.”

Will Smith just punched Chris Rock and told him "keep my wife's name out of your f***ing mouth" pic.twitter.com/1f1ytdbMRv

At the end of his speech, Will Smith added: “Thank you. I hope the academy invites me back.”

US clergyman, Creflo Dollar, has denounced his position on tithing. For many years, Creflo had preached on the importance of Tithing and had informed his congregation that failing to tithe opens the door for devourers to come in and destroy a person’s life. END_OF_DOCUMENT_TOKEN_TO_BE_REPLACED

David Beckham and Victoria Beckham have taken to Instagram to profess their love for each other on their 23rd wedding anniversary. END_OF_DOCUMENT_TOKEN_TO_BE_REPLACED

Chris Brown has said the public is only interested in negative news about him but go silent when he drops an album. END_OF_DOCUMENT_TOKEN_TO_BE_REPLACED

Congratulations are in order for singer Jhené Aiko and rapper Big Sean as they are reportedly expecting their first child together. END_OF_DOCUMENT_TOKEN_TO_BE_REPLACED

Videos have emerged of the moment a Russian ice hockey star who signed a million-dollar contract with an American team was rounded up by Russian policemen and taken to an army enlistment office before he is sent to fight in the war in Ukraine. END_OF_DOCUMENT_TOKEN_TO_BE_REPLACED

A woman who flashed a gun before attempting to make her way into Diddy’s BET after-party was arrested outside the mogul’s house. END_OF_DOCUMENT_TOKEN_TO_BE_REPLACED