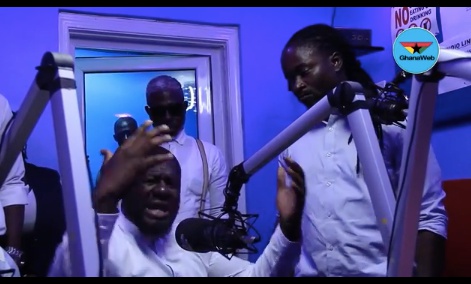 Head of the Zylofon Arts Club, Willi Roi has banned Ghanaian poet and critic, Kwame Agyemang Berfo from the studios of Zylofon FM, following a heated argument about the conduct of Zylofon media in the tussle with dancehall artist Stonebwoy. Mr. Berko, who was criticizing Artiste and Repertoire Manager of Zylofon Media, Bulldog for storming the premises of Paloma Hotel to retrieve a Mercedes Benz from Stonebwoy, argued that the chaos would have been avoided if the right procedures and rule of law had been followed. There has been growing tension between management of Stonebwoy and Zylofon media, with some people predicting a possible termination of contract since the signing of “self-proclaimed” dancehall king Shatta Wale onto the record label https://youtu.be/kknR8zDNcwA But addressing the fracas, Bulldog in an interview with Sammy Flex on his “Showbiz Agenda” program, Kwame Agyemang Berko asked Bulldog to take responsibility for the clash between the two teams at Champs in Paloma Hotel, which led to some gunshots being fired. But reacting to the critics, Willi Roi described the statement as baseless. He further called on the producers of the program to walk the Ghanaian poet out of the studio for making an assertion he claims is an upright disrespect to the media brand. “How can you compare this media firm to Stonebwoy and say this place is pale. Next time you bring this guy here, I’m actually going to deal with you Sammy Flex. If this place is pale, then what are you doing here. Don’t you give him allowance when he comes here, don’t we give him money. Security get this guy out of here. He’s not supposed to be here. In fact he should never come back here.]]>

Related Topics:Zylofon FM
Up Next