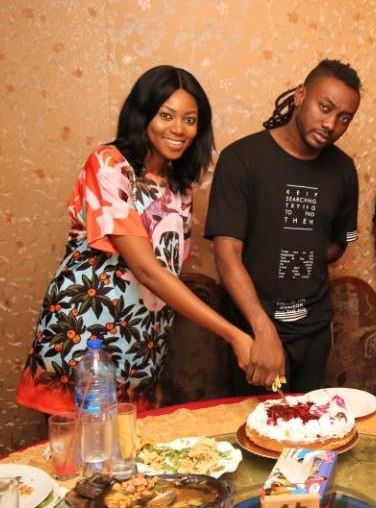 A couple of years ago, Yvonne and Pappy Kojo were always spotted spending a lot of time together. Yvonne was featured in the video for his song “Awoa” and Pappy Kojo was equally featured in her “Heels and Sneakers” series. This however, generated a lot of dating rumours.

Speaking in a previous conversation with Joy News’ MzGee on her weekend show ‘The Gist’, Yvonne denied rumours about she and Pappy Kojo dating saying that even though he’s a hot guy, they are family and couldn’t date.

“Pappy is family but I think he is a hot guy…We used to spend a lot of time together…He is family, he is my cousin. He is Gaisie, my grand mum is Gaisie and we are all from the same place…We’ve always known…ask him…so even if we were feeling each other that thing was just holding us back,” she said.

Yvonne went ahead to ask MzGee to ask Pappy Kojo about them being family.

In a much recent interview however, MzGee went ahead to ask about their relationship when she caught up with Pappy Kojo.

Read their conversation below:

MzGee: Is it true you are related to Yvonne Nelson?

MzGee: Who was Yvonne to you?

MzGee: Are you related to Yvonne Nelson?

MzGee: Yvonne told me, you both were cousins.