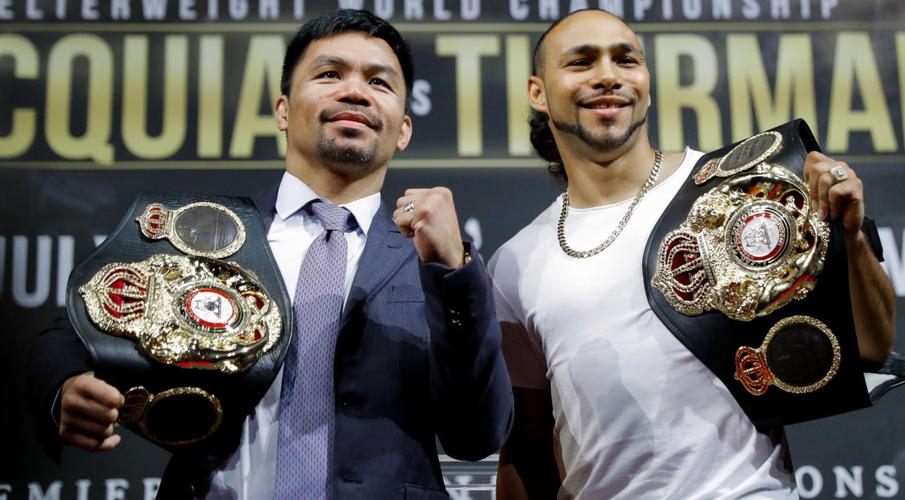 The undefeated Thurman, 30, takes on Pacquiao in Las Vegas on July 21 in a contest that pits the WBA’s “super world champion” against the body’s secondary “world” champion which will air exclusively on SuperSport One at 1am.

Thurman (29-0, with 22 knockouts) returned from a near two-year layoff to retain his title with a 12-round majority decision over Josesito Lopez on January 26.

Eight-division champion Pacquiao, who last fought in a one-sided demolition of Adrien Broner in January, is 10 years older than his American opponent.

And as the two men came face to face at a press conference in Beverly Hills on Wednesday, Thurman vowed to make the age difference count.

“I’m destroying the legend of Manny Pacquiao,” Thurman said. “His legacy ends on July 21. He’s had a wonderful career, and been an inspiration. We all love him and respect him. And I’m respectfully going to kick the shit out of him.

“This is a big fight as far as the stage. But it’s a big fight against a little guy. I’ve dismantled veterans in the past, and throughout my career. I would have destroyed him five years ago.

“I know he likes to quote Bible verses so I’ll let you know – he’s getting crucified.”

Pacquiao, who mixes a political career as a senator in the Philippines with professional boxing, laughed off Thurman’s threats of annihilation.

“All I can say is that most of my opponents say things before a fight,” Pacquiao said. “That’s what I hear from them – ‘I’m easy to beat’. But when we get into the ring it changes. We’ll see who’s young in the ring on July 21.

“I don’t like trash-talking before a fight. I’m going to let my fists do the talking.”

Pacquiao plans to split his training camp between the Philippines and Los Angeles, wrapping up his preparations under the watchful eye of long-time trainer Freddie Roach, who is back in his corner.

“Manny Pacquiao is the best fighter in the world to work with,” Roach said Wednesday. “His work ethic is unbelievable. We’ve studied Thurman and come up with a game plan. And we’re going to destroy him.”

Pacquiao meanwhile insisted that his advancing years had not diminished his enthusiasm or energy for boxing.