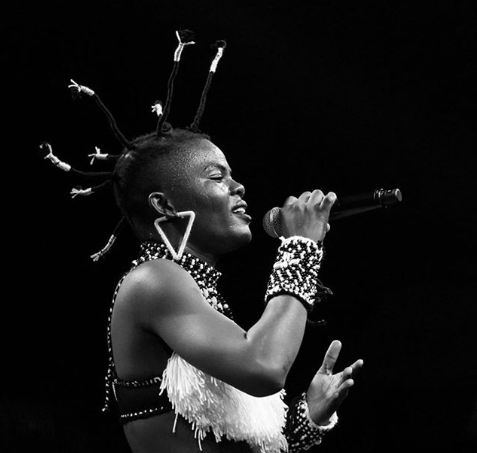 Ghanaian International Afropop singer, Wiyaala has been nominated for Best World Production Music at the Production Music Awards 2019 slated for the 22nd November at The Ballroom, 8 Northumberland Avenue in Central London.
“Nabori” is a Universal Production Music song from their ‘Global Attitude’ 2019 album, featuring ‘bongos crossed with Baile Funk beats and authentic Sissala female vocals with extreme attitude and ROARS!!’

The work is a collaboration between Amy Mcknight, a renowned London based music producer/composer/songwriter, Chris Jefferson and Wiyaala on vocals.

Also known as the Lioness of Africa, Wiyaala explained how she got on the track.

“I was introduced to Amy through my work with GRRRL and she thought I would be just right for a song on the album. Amy wanted something with the roar factor, so I came up with the idea of a wild African lioness on the rampage in a foreign town which is exactly what I do when get on the international stage. The lioness can not be contained and you will dance with joy or run away in fear! We were so inspired we ended up doing three songs” she stated

The Production Music Awards, London, celebrates the best production music libraries and the most talented composers from all over the world offering libraries large and small the opportunity to share the depth and quality of modern production music with the wider sync, media and advertising industries.

Wiyaala to speak at Cambridge University’s ‘Africa Together’ conference

Universal Production Music produces and licenses production music for use in film, television, advertising, and interactive media. It is a wholly-owned subsidiary of Universal Music Publishing Group. Amy McKnight is a London based composer and songwriter who has worked with Sony, BMG, Warner Music, Universal, Vodafone, SATV and DEFECTED Records. Her credits include Stella McCartney (insta campaign), BBC series – The A list, Channel 5 – Big Brother UK, BBC – FIFA, ITV – Formula One Final.

Wiyaala, from the Upper West Region of Ghana, is a multi-award winning singer/songwriter and public figure known for her work with children and women in her community. Wiyaala’s uncompromising positive attitude and authentic portrayal of African culture have won her plaudits worldwide with many features on international media platforms such as CNN, BBC, SKY News and The Financial Times.

TV3 is not only best in new and entertainment, but best in rewarding its staff too. END_OF_DOCUMENT_TOKEN_TO_BE_REPLACED

The Ave Maria School has launched its 40th-anniversary celebration by urging school leaders to provide better opportunities and platforms for interaction with students in order to guide them in their education. END_OF_DOCUMENT_TOKEN_TO_BE_REPLACED