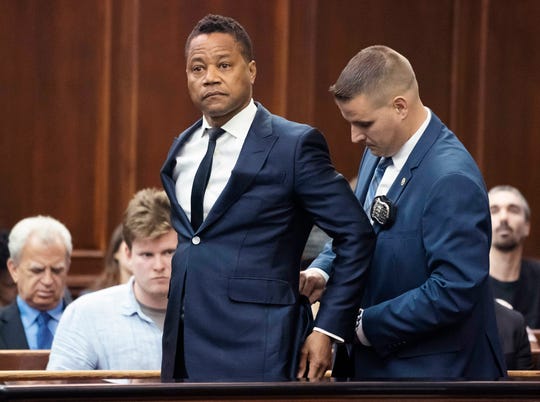 Cuba Gooding Jr’s lawyer says more than two hours of video surveillance from inside a New York bar shows the woman who has accused Gooding of drunkenly groping her breast was “stalking” Gooding and his girlfriend all night.

Mark Heller, a New York lawyer on the team defending the Oscar-winning actor on a misdemeanor charge of “forcible touching,” says the two video snippets posted by TMZ and trumpeted as visual proof that Gooding put his “hand on (the) accuser” is nothing of the sort.

Heller said he is collecting affidavits from witnesses who were in the Magic Hour Rooftop Bar and Lounge on Sunday night, including Gooding’s girlfriend, Claudine De Niro.

He said he will file a motion next week seeking dismissal of the groping charge in “the interests of justice.”

Gooding, 51, surrendered to New York Police sex-crimes detectives on Thursday, was arrested and arraigned, pleaded not guilty and was released with a next court date set for June 26.

But Heller told USA TODAY he is “100 percent confident” the charge will be dismissed and quickly. He says police should instead investigate the accuser, a 29-year-old woman who has not been identified, for making a “perjurious complaint.”

“I want to see them make an example out of this lady,” Heller said. “A handful of women making false claims, it severely hurts other legitimate (claims).”

The accuser has not spoken publicly to the media about what she says happened to her, and it is not clear whether she has an attorney or a representative to speak for her.

Bits of the surveillance video, now playing on CNN and other media, are blurry and puzzling.  In fact, the scene also includes an unknown man (not Gooding) who approaches the three figures believed to be Gooding, De Niro and the accuser, and starts grinding his crotch in their faces.

Heller said Gooding’s legal team watched the entire video and he still maintains he saw nothing inappropriate on the part of Gooding.

“We watched the entire two and half hours of video and it shows Cuba being stalked by this lady – she’s following him around (the bar),” Heller said. “He’s sitting with Claudine in a private conversation, she doesn’t know them but she sits herself down almost on top of Claudine and interjects herself where she doesn’t belong.”

Since the video snippets aired under TMZ’s “titillating” headline, Heller said, he’s been fielding calls from witnesses in the bar that night who said they didn’t see “an act of sexual abuse or forcible grabbing and squeezing, which is what the allegations are,” Heller said.

A woman who has been pivotal to R. Kelly’s legal troubles for more than two decades testified on Thursday, August 18 that the R&B singer had sex with her ‘hundreds’ of times before she turned 18 years old, starting when she was just 15. END_OF_DOCUMENT_TOKEN_TO_BE_REPLACED

American rapper, Fish Scales is fortunate to be alive after he was shot, robbed and kidnapped outside an Atlanta brewery he co-owns. END_OF_DOCUMENT_TOKEN_TO_BE_REPLACED

19-year-old Florida rapper Smokingskul has just shared his new single and video “Nina”. Smokingskul is at the helm of a new era of plugg music known as “dark plugg”which substitutes the ethereal sounds of “plugg” with more tonal melodies that are accentuated by distorted percussion, producing a grimey, DIY sound. END_OF_DOCUMENT_TOKEN_TO_BE_REPLACED

Drake officially has more slaps than The Beatles. END_OF_DOCUMENT_TOKEN_TO_BE_REPLACED

Swizz Beatz and Timbaland have filed a lawsuit against Triller, claiming the company still owes them $28 million for the sale of their Verzuz series. END_OF_DOCUMENT_TOKEN_TO_BE_REPLACED

Everything you need to know about Delta 8 Pre-rolls