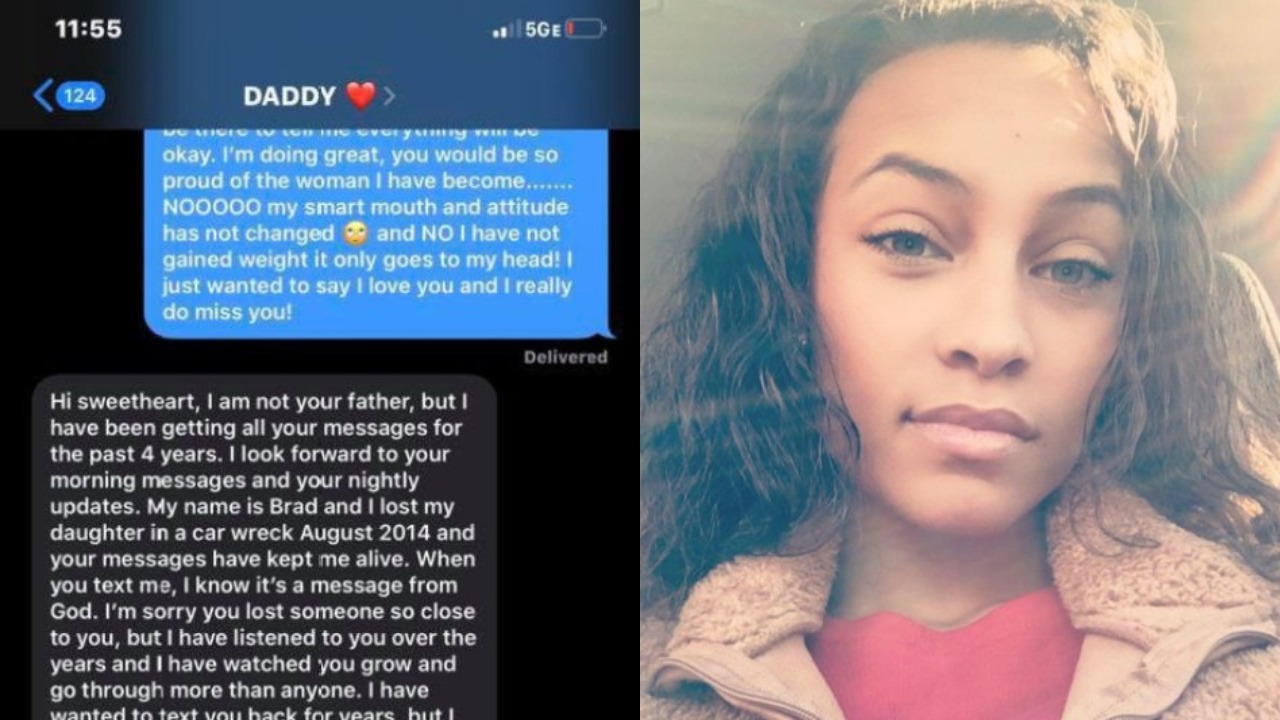 A woman who sent text messages to her late father’s phone every day for four years got the ‘shock of her life’ when she got a response.

Chastity Patterson, 23, sent her father Jason Ligons updates on her life as a way to keep his memory alive. On Thursday, she sent a message to him on the night before the fourth anniversary of his death, saying: ‘Hey Dad, it’s ME. Tomorrow is going to be a tough day again!’

She sent a long text mourning her father’s passing and mentioning her triumphs including graduating college and beating cancer. So when a man named Brad responded, Chastity said she was ‘shocked and touched’.

The man had lost his own daughter in 2014 in a devastating car crash. He said he had been reading her messages every day, saying they had ‘kept me alive’.

Brad’s message read: ‘Hi sweetheart, I am not your father, but I have been getting all your messages for the past four years. ‘I look forward to your morning messages and your nightly updates. ‘My name is Brad and I lost my daughter in a car wreck August 2014 and your messages kept me alive. ‘When you text me, I know it’s a message from God. ‘I’m sorry you lost someone so close to you, but I have listened to you over the years and I have watched you grow and go through more than anyone. ‘I have wanted to text you back for years, but I didn’t want to break your heart.’

He added: ‘You are an extraordinary woman and I wish my daughter would have become the woman you are, thank you for your everyday updates, you remind me that there is a God and it wasn’t his fault that my little girl is gone.’

The man signed off by saying he was sorry, telling Chastity: ‘I am very proud of you.’ The daughter shared her messages on Facebook, saying the response from Brad was a sign that ‘everything is okay’ and her father is at peace.

R.Kelly has been removed from suicide watch after a face-off with federal authorities in the United States. END_OF_DOCUMENT_TOKEN_TO_BE_REPLACED

A multi-millionaire Russian businessman has been found shot dead at his mansion. END_OF_DOCUMENT_TOKEN_TO_BE_REPLACED

Cheryl, 61, and Quran McCain, 24, who became TikTok sensations by sharing details about their relationship with more than 2.3 million followers on just one account (@Kingqurannewpage), have revealed they are willing to spend up to £120,000 on a surrogate to have a baby together. END_OF_DOCUMENT_TOKEN_TO_BE_REPLACED

The BBC has received six complaints against disgraced DJ Tim Westwood over alleged bullying and sexual misconduct, including a historical one that was referred to the police, despite previously insisting it was unaware of any concerns about the DJ’s behaviour. END_OF_DOCUMENT_TOKEN_TO_BE_REPLACED