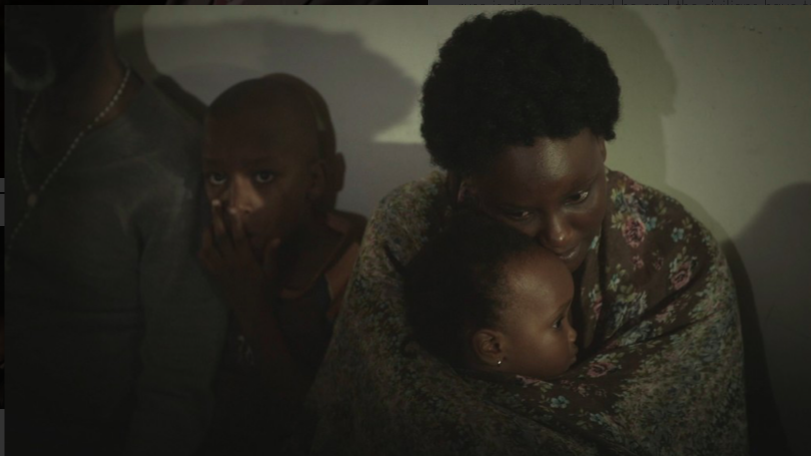 From 08:00 East Africa Time (EAT) on Sunday, the Team at MyMovies.Africa™ screened the Award-winning Docu-Film every 2 hours, until 08:00 EAT on Monday. Canada was the last to receive the Broadcast.

“We wanted Rwandans across the Globe to be able to Watch this very important piece of Rwandan history as a Community, to mark Kwibohora”, says Trushna Buddhdev-Patel – Co-Founder & Content Director at MyMovies.Africa™.

“The 600: The Soldiers’ Story is an important and inspirational Film, that not only honours self-sacrifice and courage, but also honours the memory of those who died during the Genocide against the Tutsi in 1994”, says its Hollywood Writer & Producer – Richard Hall.  “It also makes a connection between the RPA soldiers, and the civilians they were trying to protect, in one of the most desperate military missions of all time, in stopping this Genocide.  The 600 soldiers, surrounded and outnumbered by Government soldiers and Militias, rescued hundreds of civilians and began the counter-attack that restored order in Rwanda by 100 days.”

The 114-minute Action Docu-Film, by Great Blue Production, was officially released in Rwanda on 4th July 2019 – the 25th official Anniversary of Rwanda’s Liberation Day, when the Rwandan Patriotic Army (RPA) stopped the Genocide and Liberated the Country.

And 2 years later, Nairobi-based MyMovies.Africa™ has begun a new Tradition of a 24-hour Global Screening, for Rwandese living in the continents of Africa, Asia, Australia, Europe, North America (except USA) and South America.

“Our Software Developers literally worked day & night to Integrate our proprietary Video On Demand service with ZOOM, to create a Series of twelve Watch Parties across the World”, says Brian Waweru – Development Lead.  “Since the Customer is always First atMyMovies.Africa™, we wanted a seamless experience, from Ticket Purchase to Playback.  We even included a Free 7-Day Rental of The 600, in case a Customer lost their Connection to ZOOM during the Screening.”

“Unknown to us, MyMovies.Africa™ seems to have Hosted the World’s very First 24-hour Movie Marathon Online!”, says Mike Strano– Co-Founder & Business + Regulatory Director.  “With this new Innovation now successfully tested, we have major Plans for our Content Partners and Customers globally during the remaining Weeks and Months of 2021.”

Meanwhile, Internationally-acclaimed The 600 has won Best Documentary at the Winter Film Awards in New York City, Best Director for a Feature Documentary at the Golden State Film Festival and Best Feature at the Austria International Film Festival 2020.  And it’s still Available to #RentFor7Days or #OwnForLife on MyMovies.Africa™, in 190 Countries & Territories around the World. 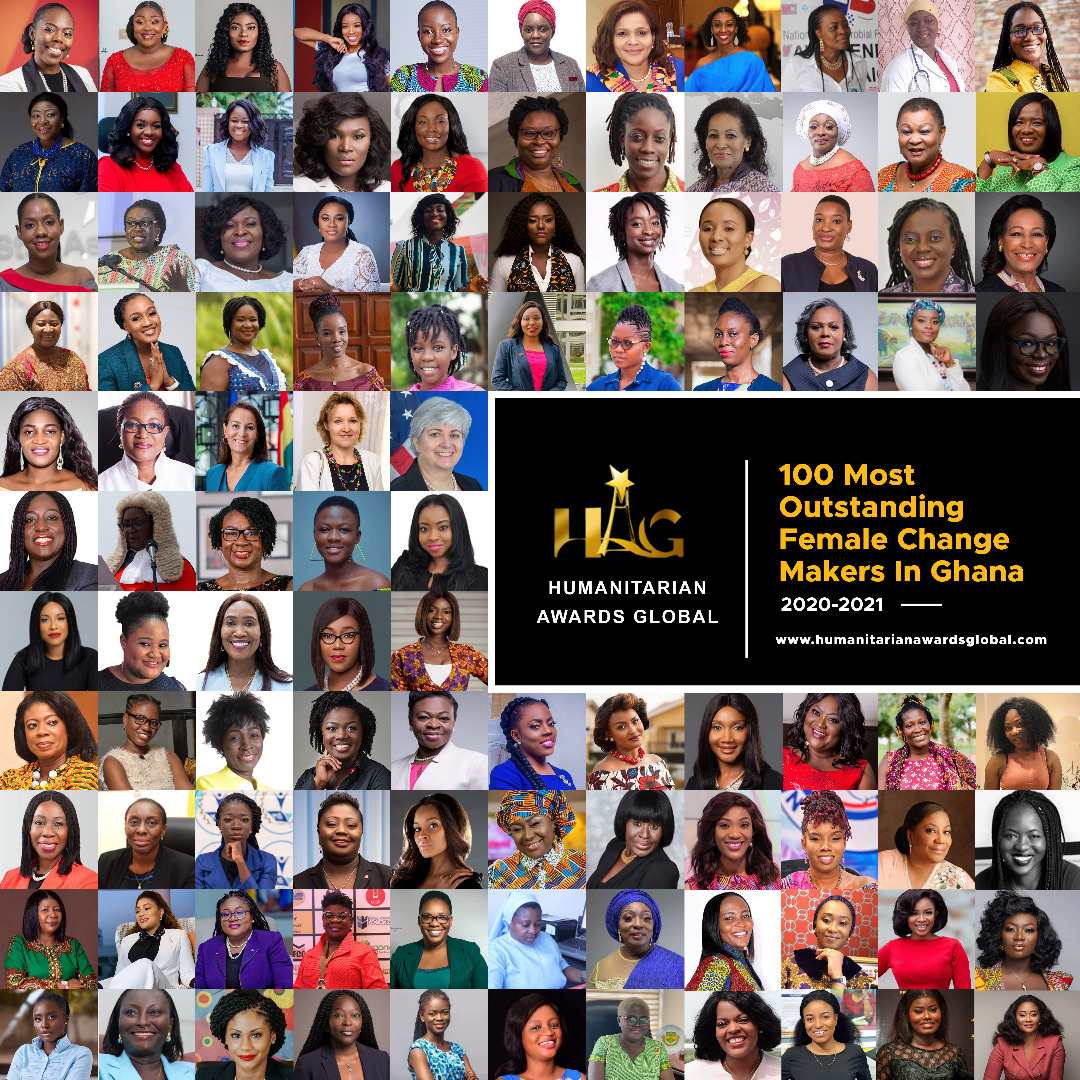 The 100 Most Outstanding Female Change Makers  In Ghana 2020-2021, According to Humanitarian Awards Global.

Humanitarian Awards Global has released its list of the 100 most outstanding female change makers from across Ghana.
Ranging from humanitarians, media personalities to business women, artists, and political leaders, the list celebrates women who are changing the status quo in the Ghana and, in some cases, globally.
“They are reshaping history, closing inequalities, and pioneering new avenues of wealth creation and in turn, lifting others with them to make the world a better place.

Among the 100 incredible female change makers on the list are the formidable movers and shakers who continue to use their voices and platforms to champion girls and women’s rights, access to quality education, and economic opportunities.

The people who appear on the list are recognised for doing something to change the world – regardless of the consequences of their actions. 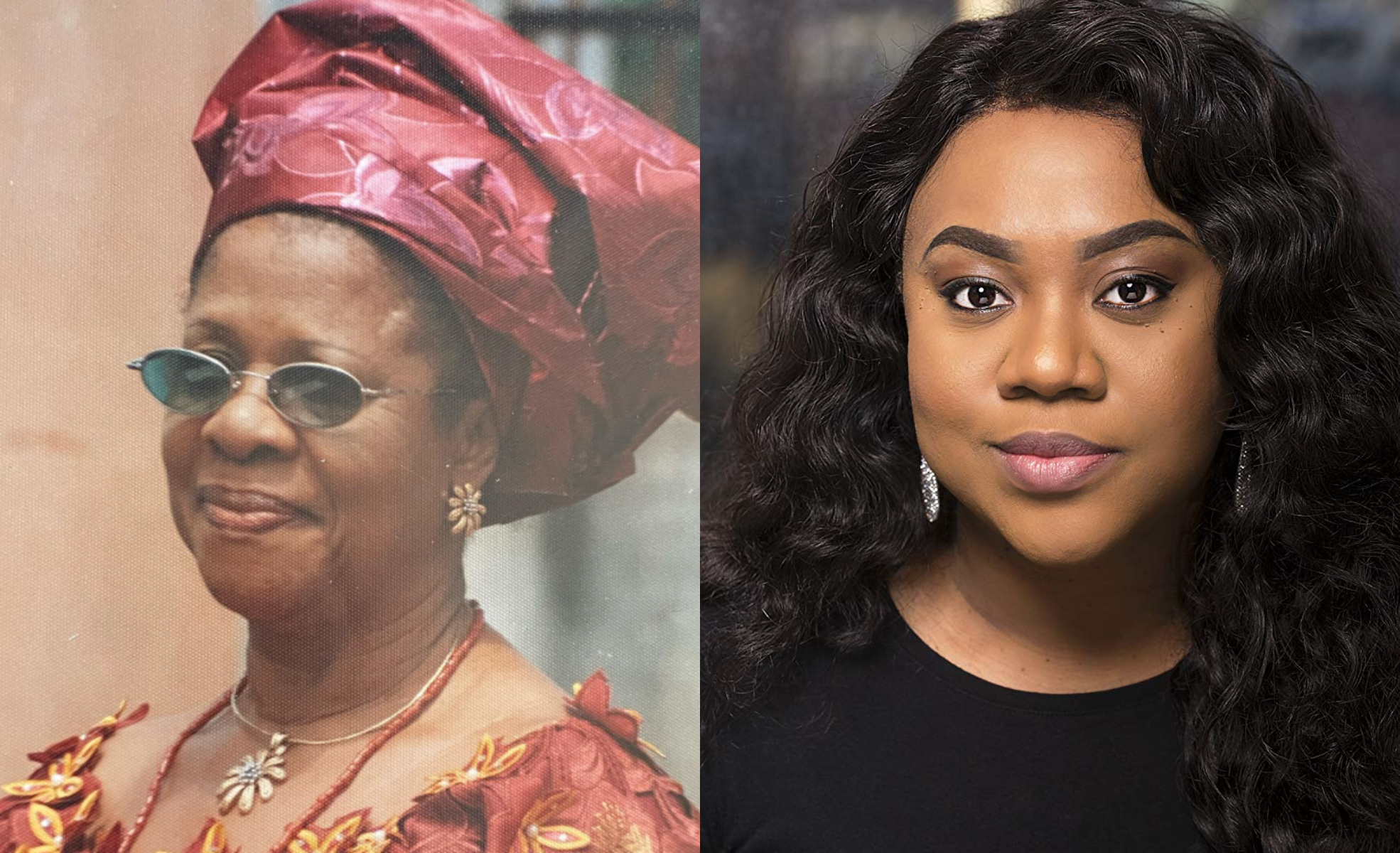 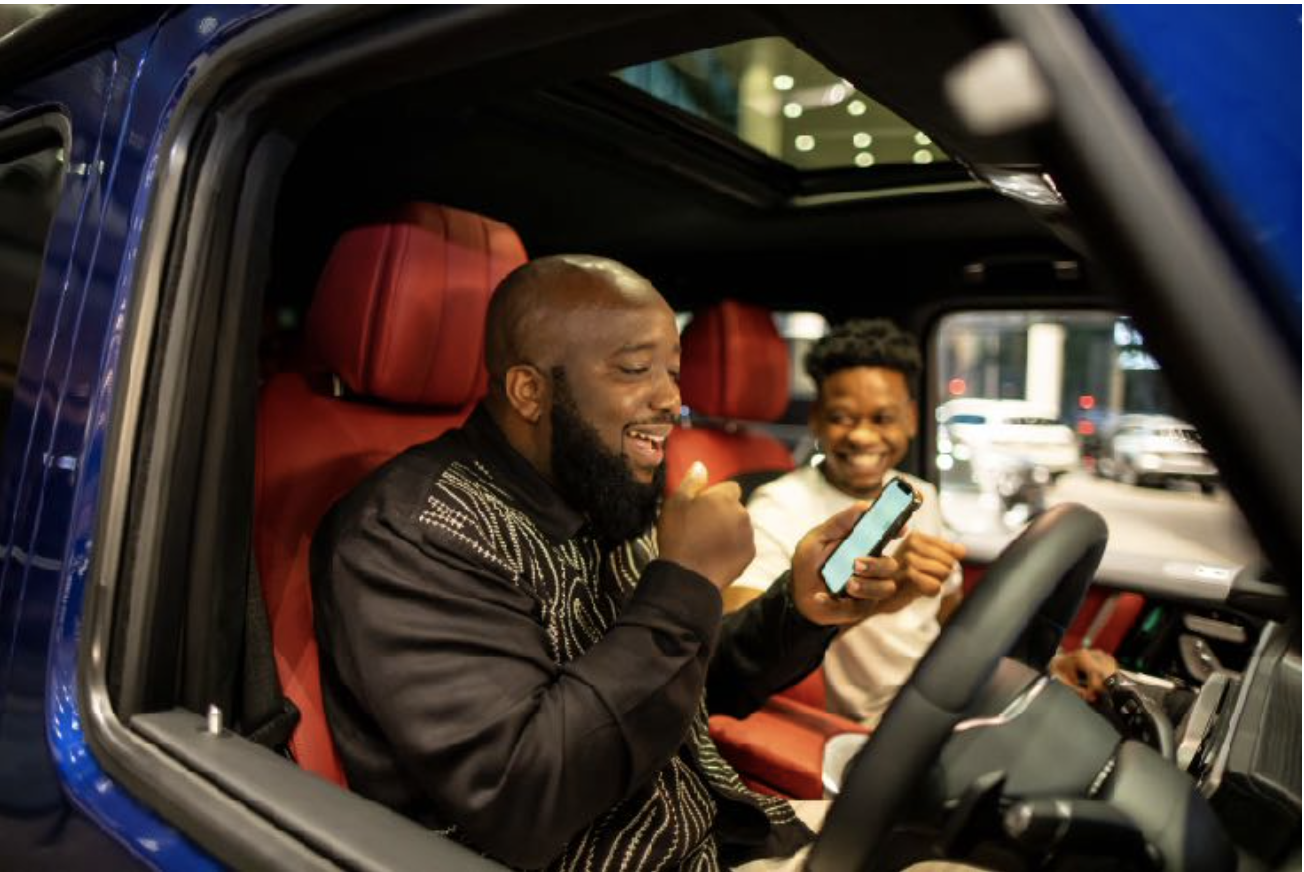 This is the experience Trigmatic and Mercedes-Benz Sandton created for guests at Trigmatic’s music showcase on the 21st of January 2022. 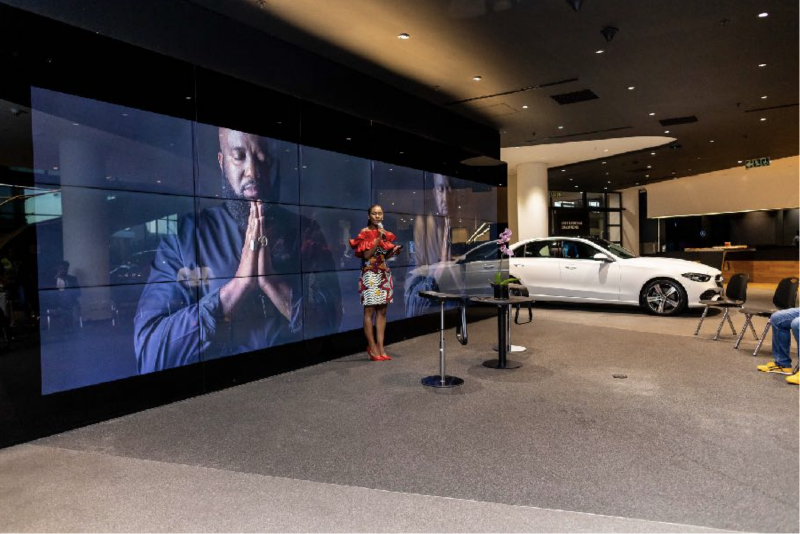 Multi award winning Ghanaian singer/songwriter/rapper and composer Trigmatic joined forces with Mercedes-Benz Sandton to host a music showcase for thirty of Africa’s music industry leaders, as well as other music stakeholders. This event forms part of Trigmatic’s pre-release events for his upcoming EP, LOVE FROM JOZI . A seven track EP inspired by the sounds and sights of Johannesburg, South Africa, where the EP was recorded.

The event was held at the plush Mercedes-Benz Sandton retailer, where attendees were treated to some great music off the EP as well as a feel of the luxury and warmth that Mercedes-Benz brings. In attendance were representatives of the Ghana high commission (South Africa), CEO of UMG Sipho Dlamini, Lerato Masepe from Def Jam, Lebo Kgothadi from Universal Music, Siphele Khumalo from Wines, Munya Chanetsa (A&R Sony Music and founder of Moti Africa), Zamani Ndimande (CEO of Bayeni Holdings), and musician Donald Denial, to mention just a few. South Africa’s DJ and Artist Dj Tira couldn’t make it to the exclusive event but sent a heart-warming video wishing Trig well in his music journey. The event was curated by South African actress and model, Angel Pooe. 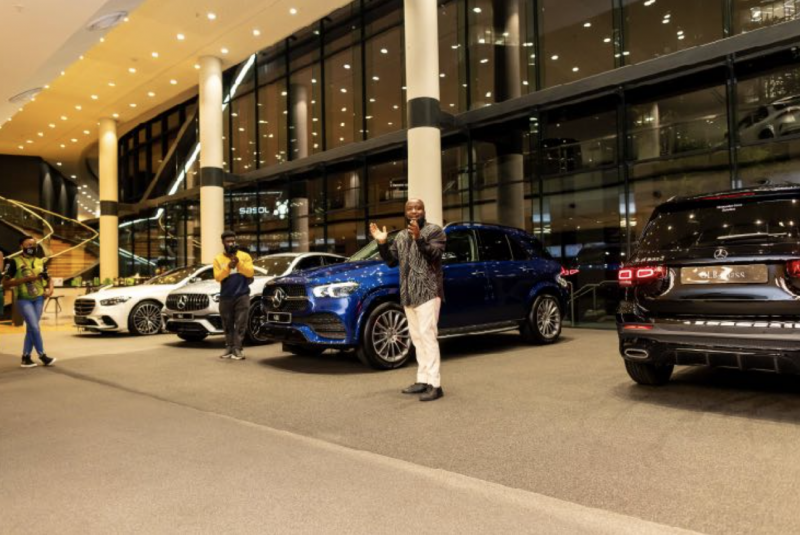 Thato Tlagae (Media Expert) and Kelvin Mogoane (AMG Product Expert) from Mercedes- Benz Sandton expressed their excitement about the collaboration between the retailer and Trigmatic, and hinted to more of these collaborations in the future.

Trigmatic in his speech encouraged more collaborative moves between corporate bodies and creatives, and more cultural exchanges between African nations. He highlighted the current attention given to African music, and the opportunities Africans stand to gain from endeavours in this direction. He expressed his gratitude towards Mercedes Benz Sandton, other sponsors, Zamani Ndimande, and all who made this a top tier event. 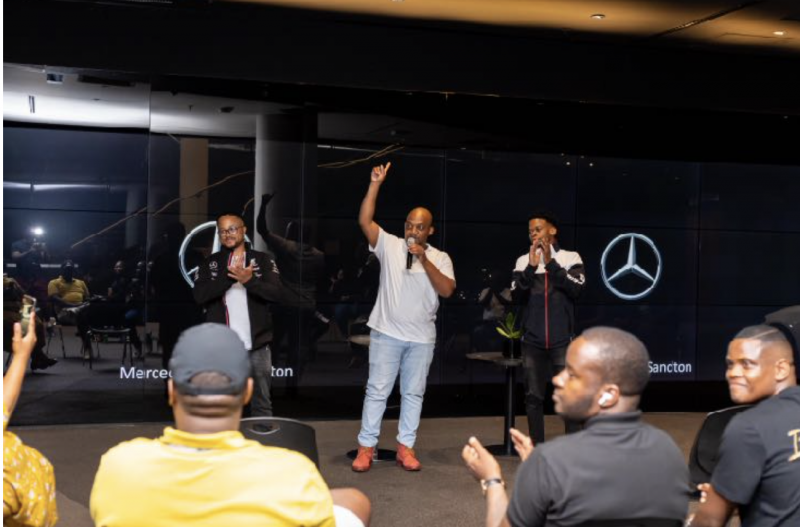 Six of the songs off the EP were played in twelve of the luxury Mercedes-Benz cars beautifully displayed on the retailer’s floor. The tangible excitement of guests increased as they were ushered into the cars which were reverberating with songs on the Burmester high- end 4D surround sound systems. Certainly a “to-die-for” unrivalled experience. The event was also supported by Bayeni holdings, Unique Print Hub, Wa Mo Afrika foundation, Khumsalo Wines, Go&fun drinks, and Matic Multimedia.

The two hour event ended on a smooth note with drinks and nibbles, and most importantly hearts filled with the kind of satisfaction that only the Mercedes-Benz S-Class can bring. The next time you think of buying a car in South Africa, think Mercedes-Benz; think Mercedes- Benz Sandton; and of course a Trigmatic playlist.

Trigmatic’s EP is expected to drop this March with expectations of taking over the continent as always. Don’t forget to check out his first single off the EP, Aduawa, on Apple Music and all other music stores. https://music.apple.com/za/artist/trigmatic/373032557

Ghanaian actress, Bisa Gbekle has revealed that it’s not all rosy when going under the knife to get your body enhanced. END_OF_DOCUMENT_TOKEN_TO_BE_REPLACED