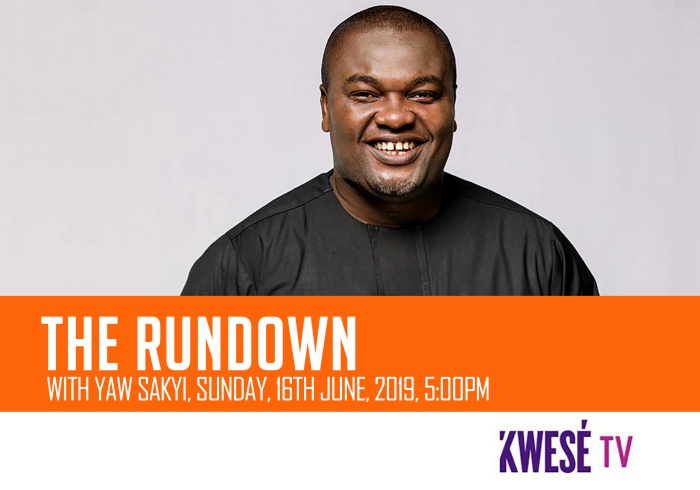 For over eight (8) years, millions of Ghanaians keenly awaited the clock to strike 8.30pm on Wednesday to tune in to TV Africa to watch the most entertaining magazine show hosted by witty and interesting host Yaw Sakyi. With his signature smile and laughter, he brought joy to many homes with The Rundown Show which featured interviews with celebrities, discussions on relationships and updates on events and general happenings in Ghana.

The show and its presenter received several nominations in the RTP Awards between 2011 and 2014 and was also honoured at the 2012 3G Awards in New York.

Yaw Sakyi hosted The Rundown on TV Africa from June 2006 to June 2014. He handed over the show to Johnnie Hughs, current host of New Day on TV3 to host the first ever Basketball Show called Fast Break on TV3 from June 2014 to October 2016. Johnnie Hughs also handed over the show to Jake Morrison, KWESE TV, when he was engaged by TV3 Network about 3years ago. KWESE TV acquired the NBA Rights from TV3, so Yaw moved to KWESE TV to create and host COURTSIDE SHOW from November 2016 till now.

In an interview with Yaw Sakyi on why he is bringing back The Rundown Show he said “I get asked many times why I stopped the show and regardless of the reason I submit these people end up saying we miss you on the show and need you back. A few people started that conversation on facebook recently and I finally decided to bring back the show especially with many issues happening in the entertainment space”, he said.

Be entertained and informed on this exciting show, The Rundown with Yaw Sakyi.

MTN Heroes of Change 2019: Louisa Enyonam Ansah, a physically challenged who never gave up on her dream of helping others
Conan O’Brien announces trip to Ghana with actor Sam Richardson
Advertisement