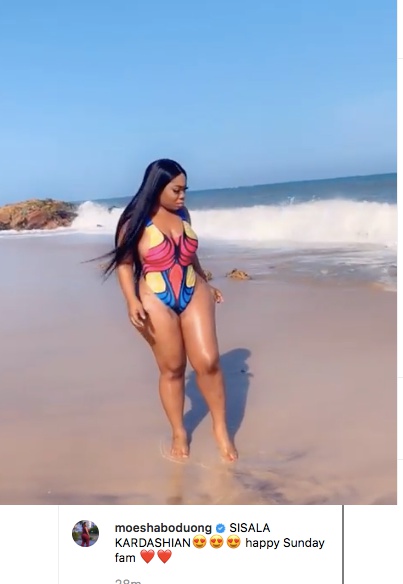 Moesha Babiinoti Boduong is an internet phenomenon that many are trying to figure out but can’t!

Perhaps Ghana’s ultimate Instagram celebrity, she literally came out of nothingness to create a lot of buzz for herself, and continues to live her best life…yes still on the gram! Her feature on CNN by Christiane Amanpour shocked many, and her fabulous lifestyle on Instagram is the envy of ‘a few’.

In the heat of a seeming catfight with actress Salma Mumin over butt implants on Instagram, Moesha wants everyone to know that she has no competition from her fellow Upper West sister!

Moesha posted a video on the beach, in a hot bikini, to reveal that she is the ‘Sisala Kardashian’.

Moesha Boduong also took to her Instagram page to troll Salma Mumin following the reports that she has traveled to Turkey to have her booty enlarged to please her boyfriend.

Considering the fact that Salma Mumin not long ago descended heavily on Moesha and Princess Shyngle and labeled them fake body girls, Moesha has returned the mockery in equal measure.

In a post on her Instagram page, Moesha Boduong reacting to the Salma Mumin’s huge butt photos going viral wrote: First, they laugh, then they copy, They always wanted yet they troll you

Moesha did not end there, she shared a romantic video with her full butts out at a beach and she revealed that Salma Mumin took the inspiration to go for the surgery from her. She advised those who are inspired by her, not to be afraid but to go all out.

WATCH THE VIDEO BELOW

According to Sister Sandy of Adom TV, Salma Mumin’s boyfriend forced her to do with the threat to break up with her if she refuses. Salma is still in Turkey nursing her sore