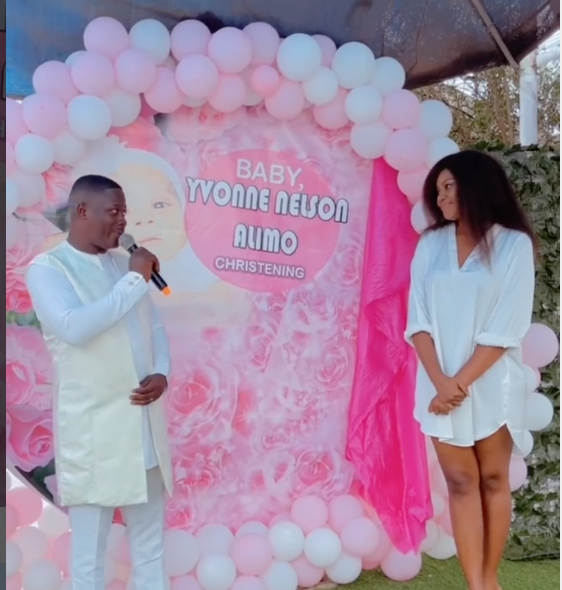 The Alimo family have named their daughter after Ghanaian actress, Yvonne Nelson.

Speaking at the naming ceremony of their baby girl, Yvonne Nelson Alimo, the father, Mr Alimo stated that Yvonne Nelson has made such a huge impact in his life, hence his decision to name his daughter after her.

“In this world, before anybody will name their child after another person, then that person has had a huge impact on their lives. I’ve been in Accra for long and since I met Yvonne Nelson, the impact has been so huge. We’ve come too far, and anytime we have a conversation, she’s always positive so I felt that if I have a very beautiful daughter as Yvonne Nelson, I would want her to emulate the characters of Yvonne Nelson because the Yvonne we are seeing here today is a very hardworking and ambitious woman. If you meet her for a minute and she speaks, and you pay heed to her advice, it will take you places. So please Yvonne, I’m also very humbled and very grateful,” Mr Alimo said in speech at the naming ceremony.

Read also: Yvonne Nelson defends not employing a guy she has blocked on Twitter

Yvonne Nelson, who was also present at the naming ceremony stated that she was very “humbled” for the honour.

Sharing the video from the naming ceremony on her page, Yvonne captioned;

Broadcaster, Serwaa Amihere has advised women not to put too much stress on their men as they may be going through a lot. END_OF_DOCUMENT_TOKEN_TO_BE_REPLACED

Dr. Edem Mahu from the University of Ghana, has received the “Africa Award for Research Excellence in Ocean Sciences” from AGU. END_OF_DOCUMENT_TOKEN_TO_BE_REPLACED

A brand-new Alisa Hotel location in Tema was unveiled on Friday, September 30, 2022 in pomp.  END_OF_DOCUMENT_TOKEN_TO_BE_REPLACED

With effect from October 1, 2022, Brussels Airlines will be one of many European airlines utilizing Aviance Ghana Limited’s services for all of its passenger and ground handling activities. END_OF_DOCUMENT_TOKEN_TO_BE_REPLACED

Music producer and artist Nektunez has a new family. END_OF_DOCUMENT_TOKEN_TO_BE_REPLACED