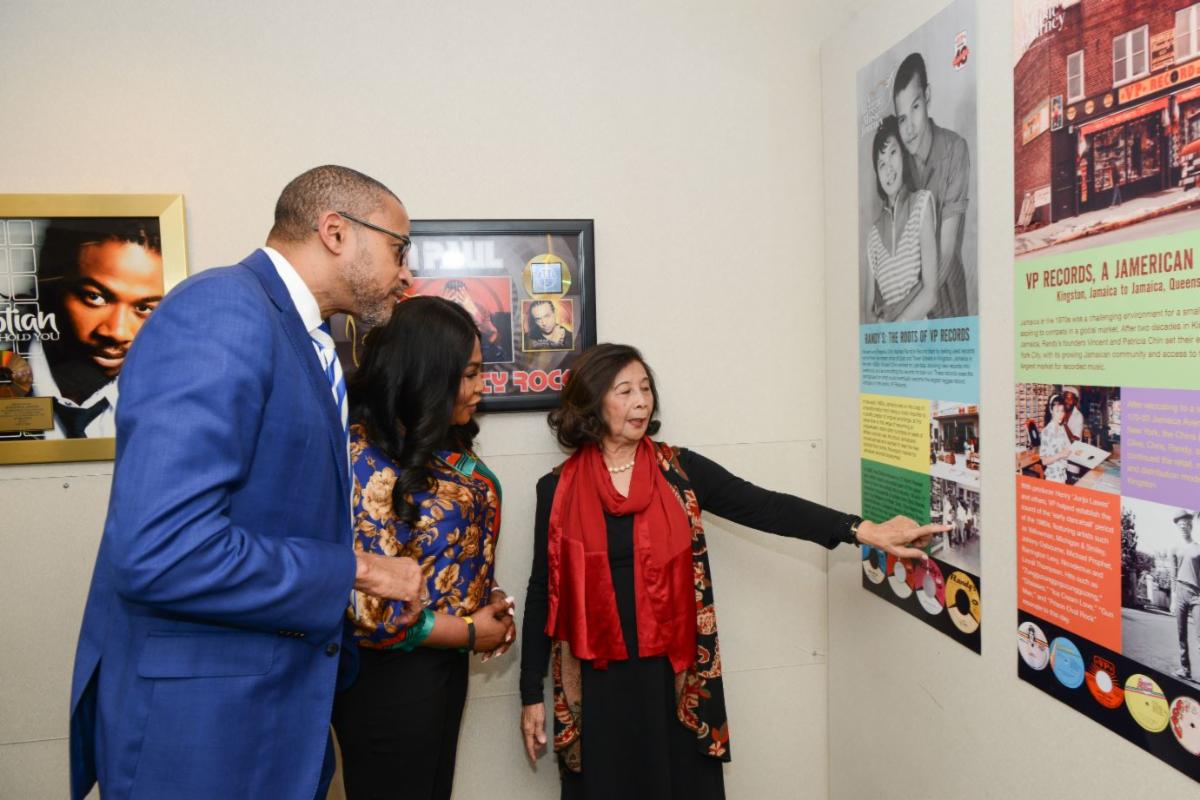 A large number of Jamaicans and friends of the island turned out on Friday evening to witness the opening of the “A Reggae Music Journey” pop-up exhibition in celebration of the Reggae Month of February, at the Jamaican Consulate in New York.
The exhibition is a historical display documenting the history of the Jamaican musical genre, and is being held in collaboration with producers VP Records.
The pop-up features artifacts including historic vinyl records from Van Pelt’s collection, and a platinum sales award for Sean Paul’s Dutty Rock LP presented to company President Randy Chin.
In declaring the exhibition open, Jamaica’s Consul General to New York, Alsion Wilson said the Consulate of Jamaica was honoured to join with the rest of the world in celebrating Reggae Month.
“This exhibition over the next three weeks, will afford Jamaicans and friends of Jamaica the opportunity to view and to have a better understanding and appreciation of the genesis and evolution of Reggae music,” Wilson said.
“From its birth, Reggae music has given voice to the voiceless and has provided numerous opportunities to Jamaicans of various socio-economic backgrounds to leave a lasting legacy both in Jamaica and around the world,” the Jamaican Consul General declared.
She pointed out that “Reggae music has left a significant mark globally. This is evidenced by the designation by the United Nations Educational, Scientific and Cultural Organisation (UNESCO) to add Reggae music to the list of Intangible Cultural Heritage of Humanity in 2018.”
She highlighted the recent success of the “young sensation Mikayla Simpson, also known as Koffee, who last Sunday, became the youngest and first female Reggae artiste to cop the Grammy Award for Best Reggae Album. This is testament to the determination and strong willpower which we as Jamaicans have for success”.
“Reggae Month was first launched in 2008. Here we are 12 years later, hosting the first Reggae Music Exhibition which I know will certainly not be the last,” she said.
In her remarks, co- founder of VP Records, Patricia Chin, told the large audience that the exhibition chronicles the over 40 years that the company has been operating in the United States and its over sixty years of operation in Jamaica.
She said her that family thought it was very important to give Jamaicans an opportunity to view VP’s contribution safeguarding and nurturing Reggae music.
An eight-panel display tells the label’s history dating to its origins as Vincent and Patricia Chin’s Randy’s Record Mart in Kingston in the late 1950s, extending to the present and featuring its 40-year run in Jamaica, Queens, New York. The story of the company’s global impact and sustained relevance is woven into the story of Reggae itself.
Some of the genre’s most admired artists, including Dennis Brown, Gregory Isaacs, Beres Hammond, Barrington Levy, Garnett Silk, Lady Saw, and Freddie McGregor — who either had key releases distributed by VP Records or were signed to VP Records — are featured in the exhibit as well.
The exhibit includes the work of photographers David Corio, Anders Jones, Wonder Knack, Jonathan Mannion, and Martei Korley.
On February 6, the birthday of Reggae icon, Bob Marley, the consulate will live stream the birthday celebrations from the Bob Marley museum on Hope Road in Kingston.
On February 21, The Reggae Music Journey exhibit will move from the consulate to the newly refurbished VP Records retail store in Queens.
Related Topics:VP Records
Up Next

Divorces happen all the time, but the world never gets used to seeing celebrity couples break up. END_OF_DOCUMENT_TOKEN_TO_BE_REPLACED

Chrisean Rock posted a very steamy video of her and Blueface just hours after announcing she was leaving because he cheated on her. END_OF_DOCUMENT_TOKEN_TO_BE_REPLACED