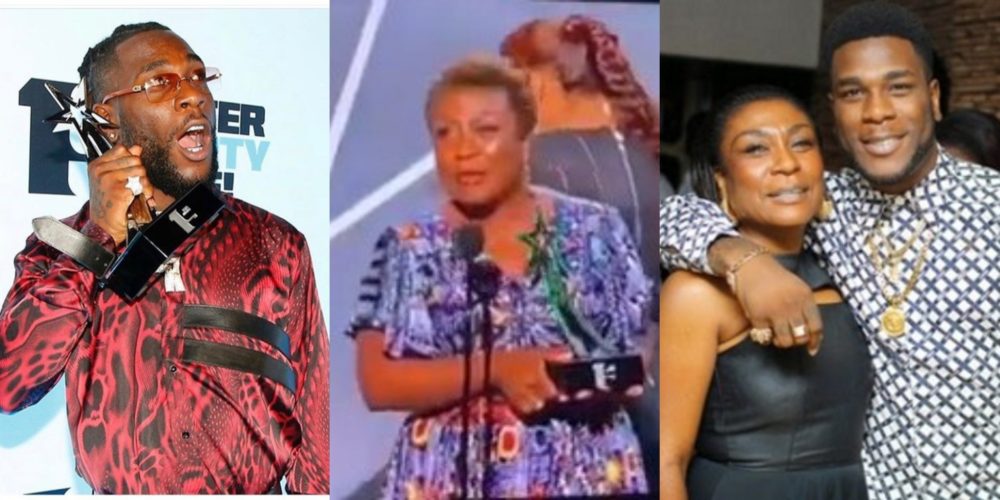 Burna Boy may have won the award for Best International Act at the 2019 BET Awards that held last night but his mum won the hearts of many viewers both home and abroad with her short yet powerful speech.

Though he was at the event with his girlfriend, Stefflon Don, Burna Boy wasn’t available when it was time to receive his award so his mum went on his behalf.

“He must be the most restless person I ever met, because he was here right now,” Burna’s mother said of her son as she accepted his award.

She then gave a short acceptamce speech that was so powerful and moved everyone present.

Speaking with grace and poise, she said: “Thank you very much BET. Thank you Africa. Because that’s the constituency for which we got noticed in the first place. And the message from Burna, I believe, would be that every black person should please remember that you were Africans before you became anything else.

At this point, a loud cheer went up in the venue.

“Thank you,” she concluded, lifting the award plaque and left the stage.

Related Topics:BET 2019burna boy
Up Next

Nigerian Disc Jockey and daughter to billionaire Femi Otedola, DJ Cuppy has outdoored the man in her life for the very first time on social media. END_OF_DOCUMENT_TOKEN_TO_BE_REPLACED

On Air Personality and YouTuber, Jessica Opare Saforo has responded to Shatta Wale’s desire to marry her. END_OF_DOCUMENT_TOKEN_TO_BE_REPLACED

Ghanaian model and entrepreneur, Hamamat Montia has welcomed a baby, months after announcing her pregnancy on Instagram.  END_OF_DOCUMENT_TOKEN_TO_BE_REPLACED

Ghanaian Artiste manager and Entertainment pundit, Bullgod suggested that funding for the Black Stars should be invested into artists in the country to fund their crafts. END_OF_DOCUMENT_TOKEN_TO_BE_REPLACED

A Guide To Major Events Happening In Accra This December