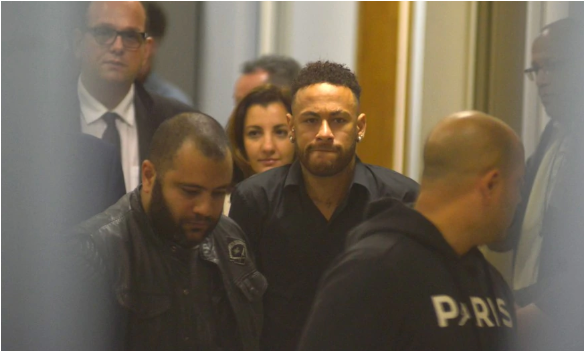 Brazil’s Neymar has attended a police station in Rio de Janeiro to make a statement following a rape allegation, his lawyer says.

The star denies raping Najila Trindade at a hotel in Paris on 15 May, and thanked his fans outside the station for their support.

MasterCard has suspended an advertising campaign with Neymar.

The credit card company said it would stop using images of the star, who is the world’s most expensive signing and plays for French champions Paris St-Germain, until the situation was resolved.

Sportswear manufacturer Nike Inc said earlier it was “very concerned” about the rape accusation against Neymar, whom it sponsors.

Neymar attended the station on crutches after having sustained an injury to his right ankle during Brazil’s game with Qatar in Brasilia on Wednesday.

His lawyer, Maira Fernandes, told Reuters news agency: “Neymar has just given a statement. He made the point of coming as soon as he could to give a statement, to clarify everything that needed to be clarified.

“We are absolutely confident that we will prove the innocence of our client… The process was thorough but he provided all the clarifications that were to be provided.”

Speaking at the door of the police station, Neymar said: “I appreciate the support and all the messages that the world has sent, my friends, my fans, that the world is with me. I want to say thank you for the well wishes, and say that I have felt very loved.”

Ari Lennox sophomore season kicks into overdrive today with the official release of her new single, “Hoodie,” and its electrifying music video. Even more, fans’ long-awaited hopes are finally realized: The Grammy Award-nominated and multi-platinum singer-songwriter proudly announces her sophomore album, age/sex/location, will be released on Sept. 9 via Dreamville/Interscope Records. Pre-order the album HERE. END_OF_DOCUMENT_TOKEN_TO_BE_REPLACED

18-year-old North Carolina-based rapper Tino Szn has just shared his new video for “Drowning Out”, a fun and upbeat track off his most recent project Sentient. LISTEN END_OF_DOCUMENT_TOKEN_TO_BE_REPLACED

In a message for International Youth Day, His Royal Highness The Prince of Wales said: END_OF_DOCUMENT_TOKEN_TO_BE_REPLACED