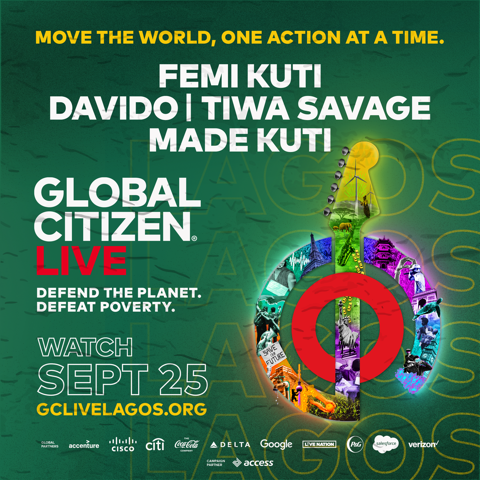 International advocacy organization, Global Citizen, has revealed many of the artists set to perform at Global Citizen Live events in Lagos, Nigeria as well as festivals in Paris, France and New York City, USA on September 25.

Across six continents, artists will help rally citizens in demanding that governments, major corporations, and philanthropists work together to defeat poverty and defend the planet by focusing on the most urgent, interrelated threats hitting those in poverty the hardest – climate change, vaccine equity, and famine.

In Lagos, Global Citizen is working with the Lagos State Government to create a limited-capacity event in celebration of Nigerians working on the frontline in the fight against the COVID-19 pandemic. The show will be filmed in advance with a fully vaccinated audience.

These events, with more to be announced later in August, are components of a once-in-a-generation, 24-hour worldwide event on September 25.

Global Citizen Live will call on leaders to deliver by September: 1 billion trees planted and preserved to help prevent global temperatures from rising beyond 1.5ºC above pre-industrial levels by curbing emissions and supporting 1t.org; 1 billion vaccines to the poorest countries; meals for the 41 million people on the brink of famine.

“As we humans spend billions of dollars in search of newer worlds in outer space, Global Citizen Live brings us back down to earth by reminding the global community that charity should begin at home and we must preserve our earth and be our brothers’ and sisters’ keepers. We owe it to ourselves and generations yet unborn. Space can wait!” – Geoffrey Onyeama, Foreign Minister of Nigeria.

Lagos State Governor, Babajide Sanwo-Olu, said: “Lagos State is thrilled to be a part of Global Citizen Live. With the challenges of rising poverty, hunger and vaccine inequity facing Africa, we need businesses and governments around the world to respond to the call of citizens, stand in solidarity with the people of Africa, and commit to defending the planet and defeating poverty and inequality.”

Dr Tedros Adhanom Ghebreyesus, WHO Director-General, said: “As wealthy countries are well on their way to reopening and returning to normal life, we now face a two-track pandemic of haves and have-nots. Over 75% of the more than 4 billion doses administered to date have occurred in just 10 countries while only 1% of people in low-income countries have received a dose. We cannot disregard this gross inequity or become complacent. This remains a global crisis, with emerging variants emanating from under vaccinated parts of the world continuing to threaten everyone’s lives and livelihoods. It will only end with global equitable access to vaccines and other life-saving medical supplies. That’s why I am pleased to support Global Citizen Liveand join Global Citizen in their calls to public and private leaders to share the doses, financing, knowledge, technology, and political solidarity needed to end this pandemic.”

Singer-song-writer and activist Femi Kuti said: “I am honored to help bring Global Citizen Live to Lagos, as we lift the voices of Africans everywhere. But what is taking place on the continent right now is a tragedy. There is no reason that 1% of Nigerians have been vaccinated against covid while countries talk of booster shots. The G7 urgently needs to donate at least 1 billion doses by September. It’s time for our leaders to lead and act now.”

“I am very excited to perform at the Global Citizen Live concert this year. The timing for this call for unity couldn’t be more important,” said Angelique Kidjo. “There is an urgent need for us to work together across the globe and take action to protect our planet. Mother nature has a way of warning us. We need each other now.” – Singer-song-writer and activist Angelique Kidjo.

Global Citizen Live is part of Global Citizen’s overarching Recovery Plan for the World, a year-long campaign to help end COVID-19 by calling on governments, philanthropists, and the private sector for financial commitments to kickstart a global recovery. Ahead of October’s G20 Summit, and COP26, the Global Citizen Live campaign will call on world leaders, major corporations and foundations to defend the planet and defeat poverty by:

In Lagos, Global Citizen is working with Lagos State Government to create a limited-capacity event in celebration of Nigerians working on the frontline in the fight against the COVID-19 pandemic. The show will be filmed in advance with a fully-vaccinated audience.

At the Paris festival on the Champ de Mars, attendees must show proof of vaccination, or a negative COVID-19 test, as required by the French Government’s guidelines.

In New York City, at the festival on the Great Lawn in Central Park, attendees must be fully vaccinated no later than two weeks before the event (exceptions made for guests not able to be vaccinated – these guests must present a negative PCR test from within 72 hours of the show’s start to gain entry), and all attendees must be masked, regardless of vaccination status.

Ghanaian rapper Medikal has been ordered by an Accra Court to be remanded in prison custody for 5 days. END_OF_DOCUMENT_TOKEN_TO_BE_REPLACED

Ghanaian actress and TV presenter, Sika Osei on Thursday, October 21 2021 tied the knot in Accra with her Nigerian fiancé in a beautiful traditional wedding ceremony. END_OF_DOCUMENT_TOKEN_TO_BE_REPLACED

According to a CITI TV report, Ghanaian rapper, Samuel Adu Frimpong, aka Medikal, has been arrested for brandishing a gun in a video on social media. END_OF_DOCUMENT_TOKEN_TO_BE_REPLACED