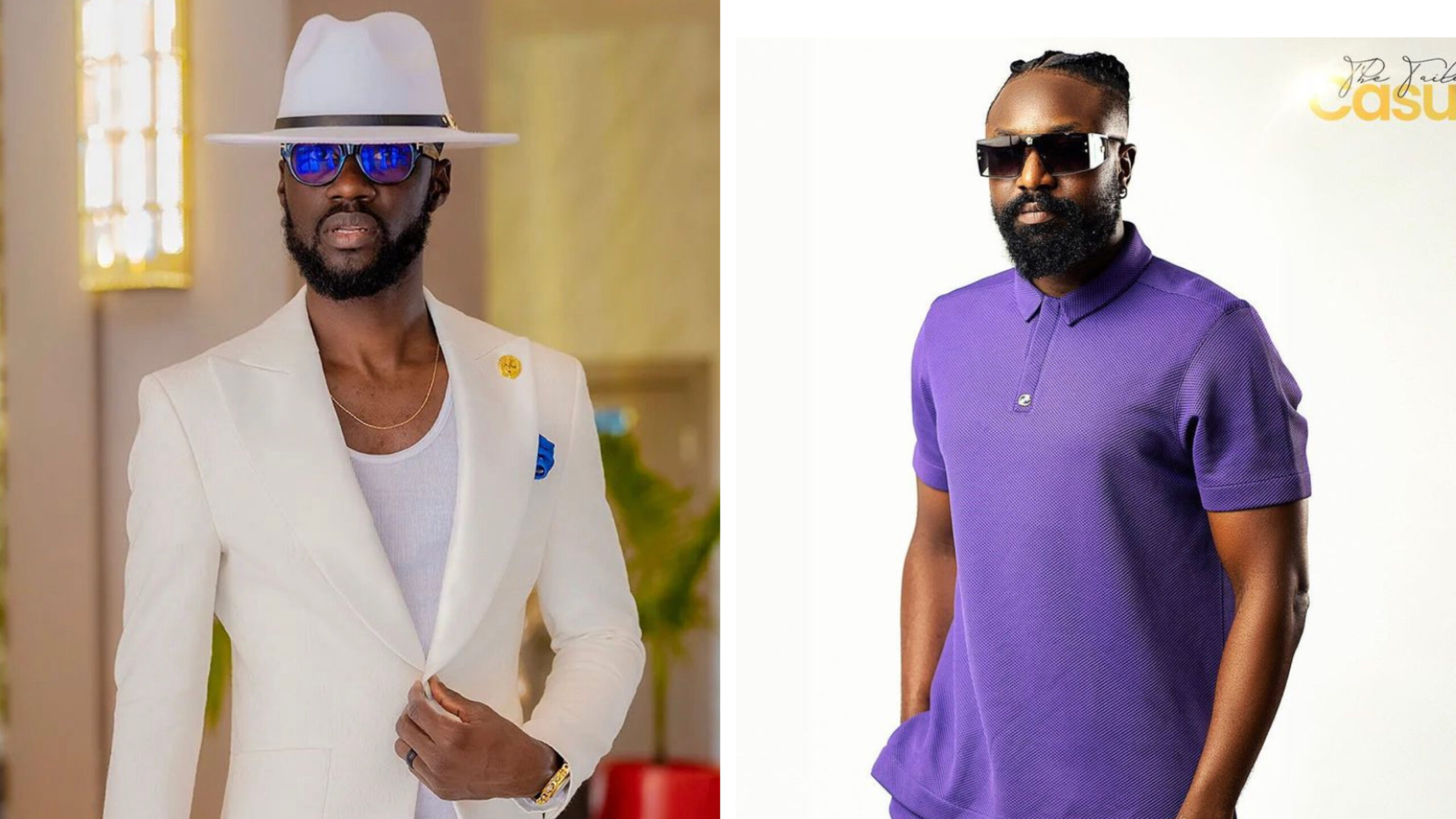 Ghanaian designers, Elikem Kumordzie the Tailor and Abrantie The Gentleman have engaged in a social media tiff over who amongst them sets the trends.

Elikem Kumordzie previously walked the runway with his son at the 2022 Glitz Style Awards, a gesture he thought was unheard of in the Ghanaian fashion business.

However, Abrantie The Gentleman repeated the gesture at the recently held “Rythymz on the Runway” where he presented his collection.

After the show, Elikem quickly took to Instagram to claim the trend-setting title for “modeling with kids” on social media.

Read also: I did not collaborate with Cina soul and Black Sheriff because of trends &#8211; Sarkodie

“I’m living in the future. Call me the Ayigbe Kanye. Kanyewest . Last night was an example of the trend setter I am. Inspiring designers in Ghana and Nigeria. People playing traditional drums and doing culture at their shows, others bringing their children on stage. Let’s all continue to be the First not the Best and push our Creative abilities through the roof,” he wrote on Instagram.

Responding to Elikem’s post, Abrantie the Gentleman clarified that he was actually the first to introduce his child on stage at a fashion show in London.

“We dey bring kiddie for stage since February in London ooo (So can I also say I inspired you? No! Great minds think alike. And for African cultural displays its since 2014 in SA till date. African Fashion culture display was a movement by the LATE KOFI ANSAH(a black and white photo I saw). We just Dey carry on the mantra bro. If you have joined let’s carry it well and stop claiming ownership and inspiring”, Abrantie responded to Elikem’s post. 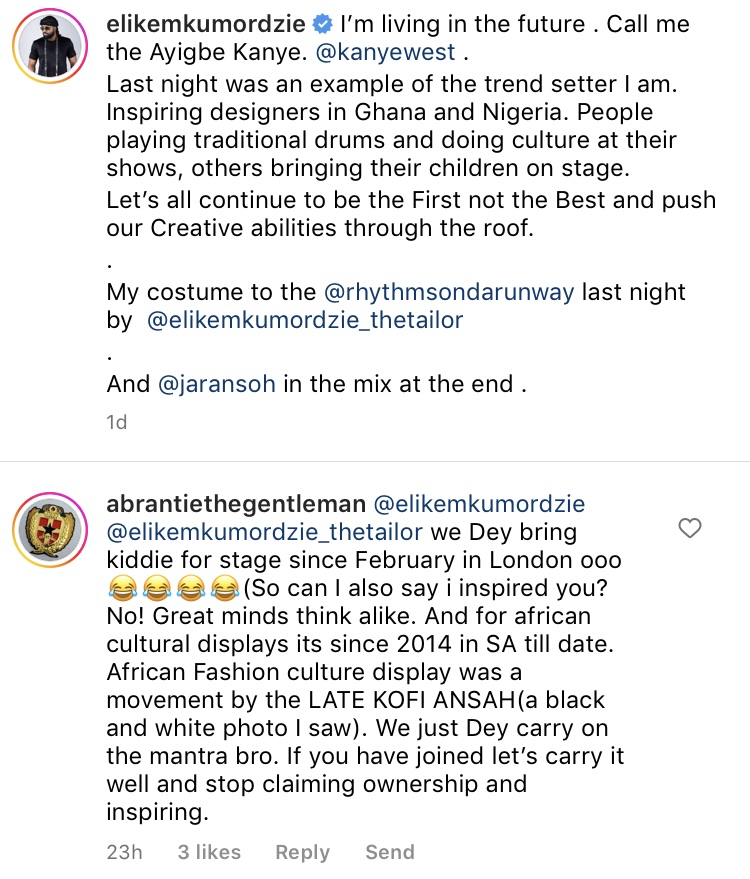 “It doesn’t matter who brought Their child to the stage First, what matters are the memories we’ll leave behind for them. Abrantie The Gentleman had a great show last night, and if I didn’t see that he brought his daughter on stage in February how would I know. And as for the cultural troop, I brought them on stage, they played live, and we heard that with you too from back stage. I’m still calling for our collaboration, or better yet a fashion Battle. Elikem The Tailor Vs Abrantie The Gentleman. We can display our fashion abilities instead of the back and forth here. Another thing about My show was that my son got the memo and fell to the ground like my models did. So it’s safe to say, my son is the “first toddler model to ever fall on the run way stage. So much for being a “pretty Betty”, #happyToInspire #theTailorsTailor.” 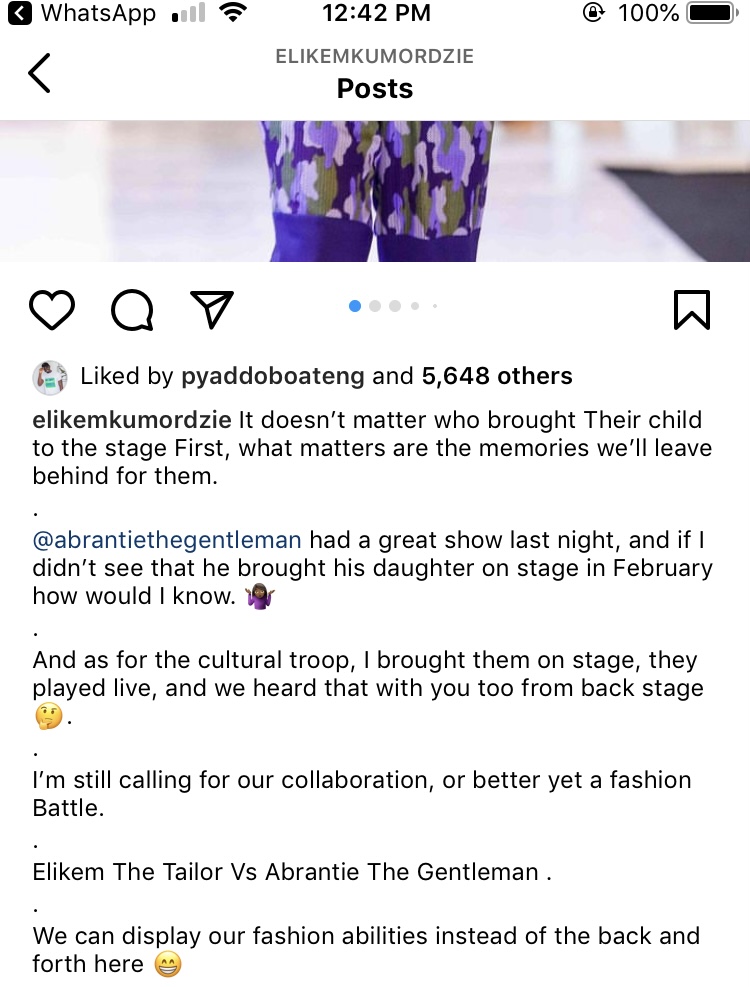 Having children is better than getting married- Brother Sammy

Legendary Ghanaian highlife musician and performer, Kwabena Kwabena has revealed what inspires him to get his lyric juices flowing.  END_OF_DOCUMENT_TOKEN_TO_BE_REPLACED

Ghanaian Media Personality, Jessica Opare Saforo has stated that working for close to two decades in the media took the best parts of her life. END_OF_DOCUMENT_TOKEN_TO_BE_REPLACED