Rebecca Akufo-Addo has presented an amount of $20,000 to ailing artist Emmanuel Apraku, otherwise known as Ray.  The money which was pledged by the First Lady last week Thursday, was received by the team behind Ray’s global fundraiser.

Mrs Akufo-Addo also signed a personal note of well-wishing to be delivered to the artist, who has received global acclaim through his PenciledCelebrities Instagram account. 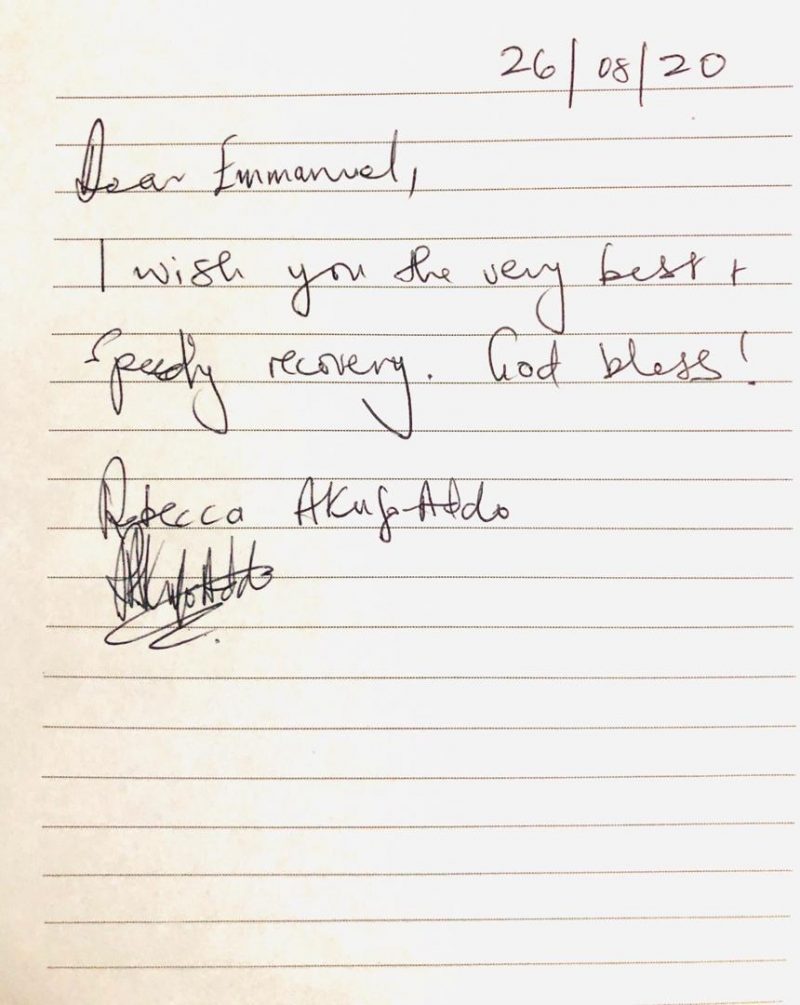 Penciled Celebrities has been one of the artistic pages that has used his art to push the narratives of the modern society we live in.

His work highlights the nuances of everyday social life and he doesn’t shy away from controversial issues such as abuse of children, how people are faking it for social media likes, among others.

He is also not afraid to speak truth to power with his work about the famous footbridge issue and others.

A GoFundMe account  was set up to support Emmanuel  to undergo emergency surgery.

I’ve only dated twice in my life- MzVee

Ghanaian singer, Efya has caused quite a stir on social media after revealing that she doesn’t know who popular Reggae artiste and Radio Host, Blakk Rasta is. END_OF_DOCUMENT_TOKEN_TO_BE_REPLACED

Ghanaian singer, Efya has reacted to Blakk Rasta’s comments about Sarkodie’s feature on the Bob Marley & The Wailer’s classic, “Stir It Up.” END_OF_DOCUMENT_TOKEN_TO_BE_REPLACED

Award winning Ghana musician who doubles as a physician specialist has stated in a recent interview on Asaase Radio that, the division of fans is rather killing the Ghanaian music industry than helping in building it. END_OF_DOCUMENT_TOKEN_TO_BE_REPLACED

American rapper, Tobechukwu Dubem, better known as Tobe Nwigwe has expressed his admiration for some Ghanaian musicians with whom he would like to collaborate. END_OF_DOCUMENT_TOKEN_TO_BE_REPLACED

Ghanaian Reggae and Dancehall artist, Stonebwoy has revisited the clash he had with Shatta Wale at the 2019 Vodafone Ghana Music Awards. END_OF_DOCUMENT_TOKEN_TO_BE_REPLACED