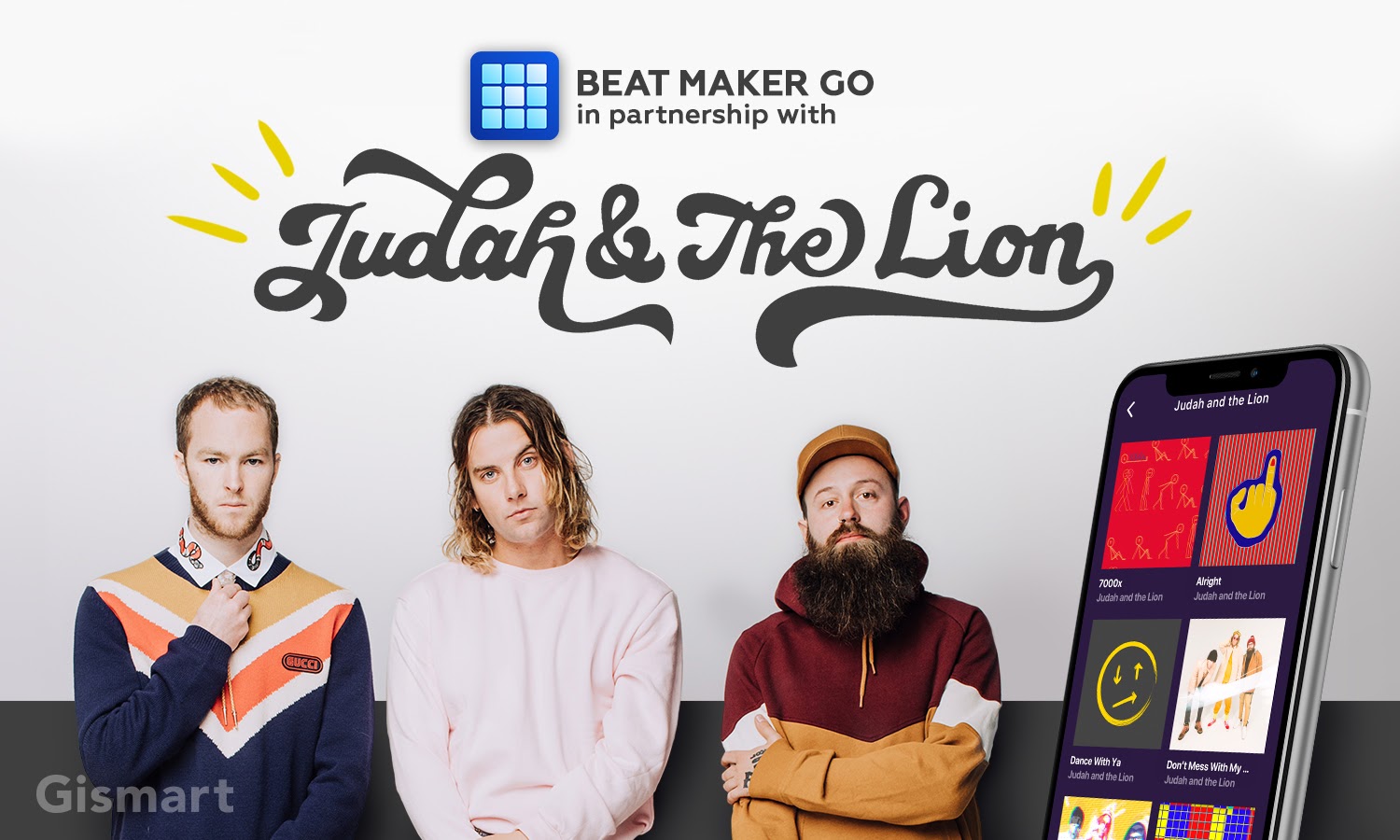 Gismart, the leading publisher of entertainment-focused apps and games, has just announced its partnership with folk-hop group Judah and the Lion, as part of the launch of their new artists programme.

With 500 million downloads and 300,000+ new users daily, Gismart is opening its doors to aspiring artists to further build on this success whilst equally embracing new and growing talent and helping them build on their own successes. The programme offers a new and unique opportunity for artists who can use their games to promote fresh music, exclusive content, and a host of exciting opportunities across a global audience of music fans. Gismart will also be offering customised solutions for artists where they can develop apps and games where the artists themselves can be featured as a character for that added personal touch.

For their first partnership since launching the programme Gismart is partnering with up-and-coming folk-hop talent Judah and the Lion through the application Beat Maker Go (iOS, Android) – an award-winning, music-making application boasting over 20 million downloads and a host of high-profile partnerships. Following the success of their collaboration with EDM superstars The Chainsmokers, the company has since further established itself as a digital platform for world-renowned artists.

Beat Maker Go is Gismart’s flagship music product with over 20 million installs and millions of active users. The app regularly makes it to the App Store top charts and continues to retain its premier spot as the most popular app for electronic music creation two years after the global release. Its popularity offers a great opportunity for artists to benefit from and promote their music and connect with new and existing fans.

Beat Maker Go presents a unique music entertainment platform for artists that allows users to create and play original music through ‘sound packs’ across various music genres – hip hop, dubstep, EDM, house, techno, pop and more. Sound packs are easy-to-play ‘musical toolboxes’ comprised of different sounds, beats, and loops sourced from a featured artist’s catalogue. Users instantly produce music using these ‘sounds’, before sharing their tracks with either a like-minded community of musicians, non-musicians, or any chosen network. Judah & the Lion will be providing the sounds from their incredible back catalogue to allow users to dive into their music and start creating! This generates new means for artists to connect with the global audience of music fans while simultaneously providing their own fans new opportunity to explore their music in a different way.

“We’re so excited to be working with talent as exceptional as Judah & the Lion. Together, we’re going to bring our audiences a genuinely unique musical experience that only Beat Maker Go can deliver. With millions of users all over the world, we want to support up-and-coming artists, as well as those more established, by connecting them with the global audience of music fans on a new, deeper level in the hopes of inspiring a new wave of creativity.” Antonia Gilham, VP Music, Gismart.

“We are thrilled to be working with Gismart and Beat Maker Go! It’s a fun product and it’s an honour to be selected for this partnership. Looking forward to hearing what the fans come up with around these songs.” Judah & the Lion.

The partnership will culminate with a global beat-making competition that’s set to unite users from across the world as they compete to write the best track using the provided sounds of Judah & the Lion. The band themselves will judge these tracks, as well as the experts at Gismart, before awarding the winners with prizes to build upon their musical talent.

More information regarding this contest is due to follow in the coming weeks.

Gismart and Judah & the Lion are collaborating to inspire creativity while uniting their audiences to experience music in a unique capacity. This continues the company’s endeavours to marry technology and musical creativity to establish a digital platform that’s ideal for delivering innovative music to new heights.

Cheryl, 61, and Quran McCain, 24, who became TikTok sensations by sharing details about their relationship with more than 2.3 million followers on just one account (@Kingqurannewpage), have revealed they are willing to spend up to £120,000 on a surrogate to have a baby together. END_OF_DOCUMENT_TOKEN_TO_BE_REPLACED

The BBC has received six complaints against disgraced DJ Tim Westwood over alleged bullying and sexual misconduct, including a historical one that was referred to the police, despite previously insisting it was unaware of any concerns about the DJ’s behaviour. END_OF_DOCUMENT_TOKEN_TO_BE_REPLACED

Amber Heard’s legal teams filed an official motion in court on Friday that the verdict in her blockbuster case against Johnny Depp is thrown out. END_OF_DOCUMENT_TOKEN_TO_BE_REPLACED

US clergyman, Creflo Dollar, has denounced his position on tithing. For many years, Creflo had preached on the importance of Tithing and had informed his congregation that failing to tithe opens the door for devourers to come in and destroy a person’s life. END_OF_DOCUMENT_TOKEN_TO_BE_REPLACED

David Beckham and Victoria Beckham have taken to Instagram to profess their love for each other on their 23rd wedding anniversary. END_OF_DOCUMENT_TOKEN_TO_BE_REPLACED

Chris Brown has said the public is only interested in negative news about him but go silent when he drops an album. END_OF_DOCUMENT_TOKEN_TO_BE_REPLACED